Politicking ahead of the 2019 general elections for various positions in the country has started in earnest with many citizens indicating interest for one position or the other through the many registered political parties.

Imo State just as any other state in the country is not left out in this arrangement as no fewer than thirty three indigenes has indicated interest to lead the State as its Governor.

Both the State and the masses are once more appearing vibrant following the jostling from one political ward, constituency and zone to the other by these gladiators and their supporters. All these however, are aimed at showcasing and selling to the masses their preferred candidates for possible acceptance.

Party affiliations notwithstanding, we believe that as a responsible media organization and conscience of the people that Trumpeta Newspaper should not renage in her obligation of educating the electorates as they prepare to endorse whoever as a candidate from the political parties.

It is on this premise that we are proferring some of these pieces of advice to both the parties and the electorates to guard against the past political experiences that has kept both the State and her citizens where they are as we speak.

Yes, all the aspirants who have indicated interests are Imo citizens and good in their rights, but there is the common English coinage which says “good, better, best”. And that is our target, prayers and expectations from the masses as they take this hard pill of choosing a candidate and finally their political leaders and representatives as the case may be.

That is why we strongly suggest to the masses so as to be very careful and mindful of the past antecedents of their preferred aspirants before endorsing them for any of the political responsibilities.

And such checks should include aspirants family and educational background, does such people have any 419 background?, what are their sources of livelihood, are they standing on a solid financial ground to avoid coming to take the leverage of public office to off-set their enormous financial indebtedness as we have witnessed in the past.

We should also not lose sight of their religious affinity and marital background. In our advocacy for relative good leaders in 2019, we should as far as we can go for the best devoid of sentiments if we actually want to achieve or get an Imo State and representatives of our dream.

Days are gone when anything goes especially with the current political awareness around the state, nation and globe. Imo State and her citizens have been fooled severally in the past and therefore cannot afford to be fooled again in 2019 because a fool at forty is a fool forever. 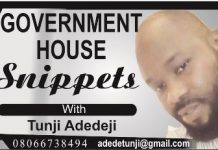