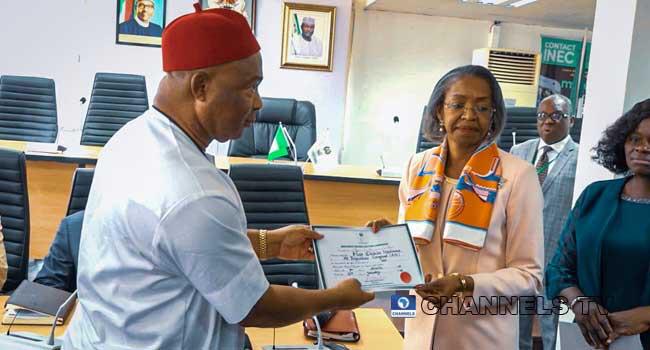 By Onyekachi Eze
There is relative tension in the camps of Hon Obinna Kingsley Onwubuariri and Jerry Alagbaoso of the People’s Democratic Party, PDP, following a change of administration in Imo State.
While Onwubuariri is warming up for a rerun election for Okigwe North Federal seat, against Princess Miriam Onuoha of the All Progressive Congress, APC; Alagbaoso is also to slug it out with Chief Edwin Ihenacho of the APC for Orlu, Orsu and Oru East Federal House of Representatives.
However, while the Imo State former governor, Emeka Ihedioha of the PDP held sway 8 months ago, odds favoured the PDP candidates for the rerun.
The Supreme Court judgment which sacked Ihedioha, and declared the APC man, Uzodinma as the governor of the State appeared to have shattered the chances of both Onwubuariri and Alagbaoso.
Reasons as gathered by  Trumpeta Newspaper is that the change in baton of the state governor may have side effects on the chances of the two  PDP candidates.
Apart from low morale among the PDP members over the unexpected exit of their governor, there would be apathy for the party to see to the victory of their candidates even as other logistics needed for an electoral victory may not be forthcoming because of the mood.