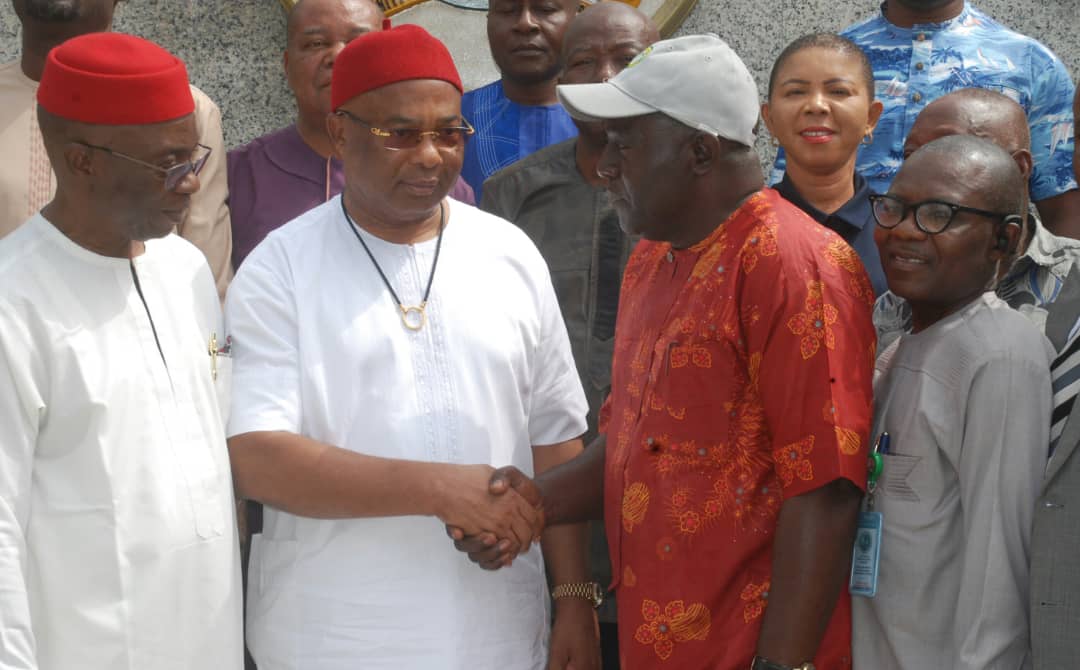 Tunji Adedeji
Members of the ruling All Progressives Congress, APC, yesterday shut down Owerri,capital of Imo State in a counter protest few hours after the leadership of the Peoples Democratic Party, PDP protested against the judgement of the Supreme Court which sacked Emeka Ihedioha of the PDP and declared APC’s Hope Uzodinma as governor.
They party faithful gathered at the Hero Square Owerri before proceeding to the Government House Owerri where they were addressed by the governor and party leadership in Imo State.
Imo Governor, Senator Hope Uzodinma who addressed the mammoth crowd  reiterated the determination of his administration to rid the state of any form of violent practices ,alleging that the reason why members of the People’s Democratic Party,PDP staged protests across  the country  was to overthrow President Muhammadu Buharis government.
The governor who raised eye brows over the recent PDP protest in Imo  sound a note of warning to members of the opposition party ,saying his government would not tolerate any activities that could result to breach of orders .
Uzodinma enjoined President Buhari to investigate his claims so as to ascertain the genuine reasons why members of PDP were holding protest across the country.
According to him,” you are all witnesses to how Imo citizens came out en-mass  to voted for APC in Imo State. We didn’t challenge Ihedioha Tribunal victory and Appeal court victory on crises ground but on the ground that our vote were not counted in the last election .”
He advised all Imolites to go about their businesses without fear of molestation ,saying only God made him Imo Governor and he’s in charge of affairs in the state.
The Deputy Chairman of APC Hon Ugochukwu Nzekwe who also spoke during the solidarity match  said,” today we are her to let the world know Imo people are happy with the Supreme Court Judgment, they are happy with President Buhari and they are happy with APC.
Nzekwe said ,”We are not  protesting but on a solidarity match. This is not APC rally but rally by Imo people.
He said at the Tribunal and Appeal court APC lost because the jurists compromised but the Supreme court being the apex court gave victory to the real winner .
Alao speaking the APC Youth Leader, Comr Fabian Onyekurusi (FBI)congratulated the judiciary for restoring the mandate  stolen from PDP.
He seized the platform to sound a note of warning to members of the PDP saying that Senator Hope Uzodinma’s government would not tolerate  any activities that could result to breach of peace .
“This is the last warning.”he said.
He  said they have come to celebrating a new dawn in Imo State

I Was Live at My Parent’s Burial, – Says Nnamdi Kanu