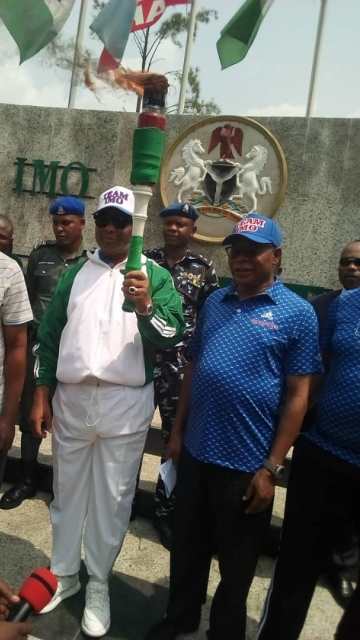 As part of rituals heralding the commencement of National Sports Festival, the Imo state Governor, Sen Hope Uzodinma on Tuesday March 2, 2020 received the “Unity Torch” at the state government house amidst optimism and excitement.
While receiving the torch symbolizes unity through sports, Sen Uzodinma  charged Imo athletes for the “Edo 2020” National Sports Festival to come back home with laurels for the state
The Governor also expressed  optimism that the 2020 festival would be better than the previous ones assuring that Imo State contingents would be at their best
He said that he was pleased to receive the torch as the Governor of Imo state.
“It gladdens my heart that this function is being performed here at the Government House with me as Governor. In the same vein, I want to receive this Unity torch light not only to lift up the festival, it will be a different game better than what we used to have and to also wish the Imo contingent a very successful outing.”
The Director of Sports Mrs. Chizotam Agboma Aretola had earlier on disclosed the preparedness of Imo contingents to participate in the festival at Edo State later this month.
She told the Sports Writers Association of Nigeria SWAN, Imo state chapter that the athletes have been training had for some weeks in preparation for the event which will be hosted by Edo state.
It could be recalled that the state athletes last weekend began their camping programmes as the Imo state Sports commission under the leadership of the Director of Sports, Mrs Chizotam Aretola said the commission has made necessary arrangement to give the athletes the best while in camp thanking the state governor, Sen Hope Uzodinma for quick approval of the programme.
While explaining the programme of their camping exercise, Mrs Aretola who was the national volleyball captain also used the medium to thank the governor for supporting the states male and female U-13 handball teams who travelled to Sokoto for national assignment.
She however noted that while all training equipment for the state athletes camping and training exercise has been demanded by the commission early enough that lack of fund to complete the full payment of the equipment is delaying their delivery and urged the government to come to their aid.
The brief event attracted eminent personalities from the sports sector and government officials including the Deputy Governor Prof. Placid Njoku, the South East coordinator, Federal Ministry of Sports and Youth Development, Mrs. Jane Owoh, Dr. Patrick Ekeji, former Director-General, National Sports Commission and former Super Eagles player, Dr. Gregory Ogu, former Director of Sports, Federal Capital Territory, Abuja and former Director of School Sports, Imo State among others.