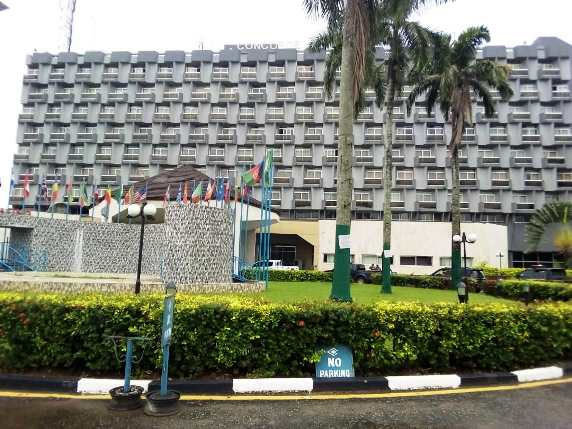 By Okey Alozie.
It was another mother of all exposures for the members of the Imo State Panel of Judicial Inquiry on contracts during the administration of Owelle Rochas Okorocha as findings of the panel during visit to some project sites were at variance with testimony of witnesses.
Following the testimonies of those invited at the state Judicial Panel of Inquiry sitting at High Court nine (9) Owerri, the probe panel resolved to visit the contract sites for fact finding. Shocking revelation however came up in almost all the sites visited.
The first place visited was Avu mechanic village built by the Rescue Mission Government led by Owelle Rochas Okorocha. One of the shop owners Prince Okey Okoro hinted that the place is horrible in the sense that the facilities are not functioning, No light, No good road.  The chairman of the Mechanic Village Mr Clinton Azuoma narrated that the structure came up 3years ago.
According to him, Okorocha’s government located the place to the mechanics at Avu” Rochas gave us Authority to build the shops after giving us allocation papers”.  Speaking further, he revealed that the former governor gave them 100million to develop Avu mechanic village.
At the new police Headquarters building also in Avu, it was discovered that the roof and ceilings have collapsed and the premises taken over by grasses.
Trumpeta observed that the offices have turned to multipurpose hall for cockroaches and rats.  At Ahiajoku convention centre, New Owerri, it was revealed that the place was above 80% completed during Ohakim’s regime. Okorocha administration did not do much there to justify huge amount quoted to have been spent on it’s completion.
The record on ground now is contrary to what was presented at the probe panel during the testimonies of some of the contractors that claimed they worked on the place during the Rescue mission period.
The most painful during the fact funding visit was Concord hotels where the new management emphatically revealed that for the past years, no Kobo was spent for any maintenance job at Concord hotel.  Observations indicated the hotel is sick as against amount of money sunk in rescuing the hospitality facility.
The Engineers observed structural defection as proper maintenance was not carried in the past years.  The new manager of Imo Concord Hotel Mr Njenje Bradane who said he took over the management of Concord Hotel by February this year disclosed that what he saw shocked him “what I met on ground was alarming. Many things got spoiled, many areas were not in order to attract customers to the hotel. The place is not functional.” Speaking further; Njenje said the finishing was very bad.
Anybody who said he has spent money on Concord Hotel in terms of rehabilitation work is lying”.  Njenje revealed to the probe panel.
Imo library Board has been taken over by grasses as workers are said to have deserted the place.  The place is well equipped as the best ICT center but no maintenance. Fear of snakes made people not to come even as the celling boards have started collapsing.
Centenary building where millions have been sunk into located at the back of the new High Court Owerri is said to have been abandoned by the contractors because of no funding. The sky scrapper is now a waste of money to Imo government. It was observed that the building which supposed to have about 22 storey- building has reached the fifth floor.
Amakohia fly over where past government claimed to have spent over 3 billion naira is now a danger zone.  The Nigeria Society of Engineers it was gathered declared the bridge unacceptable and not worthy for use despite amount spent.