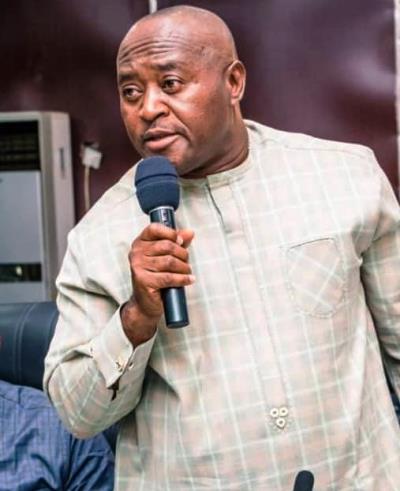 The stories about coronavirus ravaging the Imo State House of Assembly have prompted the Peoples Democratic Party, PDP in Imo to task Imo State Government into naming those affected.
Trumpeta recalls that the state legislator has been in the front burner of discussion concerning the Covid-19 pandemic when the assembly complex was temporarily shut down to enable members go into isolation and get treated.
But the PDP thinks otherwise hence the demand for the government to name those affected.
In a statement issued by the Acting PDP Publicity Secretary, Ogubundu Nwadike, the party said “Imo PDP is aware that the news of the toll of the infection among members of the Imo State House of Assembly (IMHA) is in the public domain. What still remains inexplicable, however, is why the identities of the infected lawmakers are still kept secret and confidential, whereas in other States of the federation, infected governors, and other officials of government at all levels are made public. Even those that sadly pass on because of the virus and its complications are made public elsewhere” he noted.
He further alleged that “After listening to the Covid-19 pandemic update broadcast by Senator Hope Uzodimma to the people of Imo State on Wednesday, June 24, 2020 and not hearing anything about the positive patients, particularly those from Imo State House of Assembly, and what the regime is doing about contact tracing, but focusing on issuing of threats to defaulters of the order on wearing of face mask, shutting of religious places of worship and so on, Imo PDP noted that the entire war against Covid-19 pandemic in the State was being politicized for reasons that are certainly detrimental to the overall well-being of Imo people.
Nwadike also disclosed that his party  is worried over the daily fresh reports of new Covid-19 infections being recorded and reported from the State on the daily national index case list been published by the National Centre For Disease Control (NCDC).
According to him “It’s only such dishonest, poor, and unprofessional approaches by this regime to controlling the spread of the disease would account for the sudden onset and increase in the number of coronavirus patients in the State within a short time. That is most unfortunate. Though, the number of deaths from the pandemic has remained low in the State, our party feels the psychological trauma and its attendant fear of a possible unpleasant end compares favourably with the actual death of the positive patients. Prevention is better than cure.
The party’s Spokesperson observed that since COVID – 19 pandemic has been accepted to be  right in the State and waxing higher in number and severity, that his party has charged the state led APC Government to rejig its plans, policies, programmes and projects for containing the pandemic with success at heart.
According to him “Let the system of absolute secrecy be jettisoned. Let information flow. Let Imo people know the infected persons, so as to avoid making avoidable contacts with them and contracting the virus. Let contact tracing be honestly implemented to identify more victims. And let the enforcement of precautionary and preventive measures be sincerely and professionally done” he advised.
The party passionately advised the State Government on the need for an immediate stem the rise in coronavirus infection in the State by providing adequate funding for the relevant committees, ministries, departments and agencies to decisively fight the war against coronavirus in the State.
They lamented over the recent unsavoury reports of near zero funding for the management and control of the pandemic in the State which they said is unacceptable arguing that life has no duplicate.
They further cautioned against the alleged politicization of Covid-19 pandemic in the State while advising the State Government on the need to be proactive in its strategic efforts of stemming the increasing tide of the coronavirus infection.