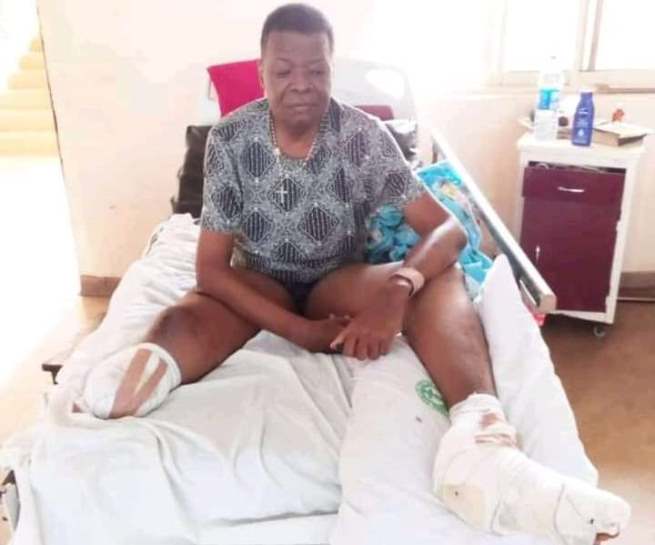 By Chioma Nkama
Ace broadcaster and a guru in the radio studio, Oge Helmut Iwu, who is down with illness has expressed serious disbelief  that he never expected to witness such condition he has found himself at the moment.
Iwu, a household name in the electronic media industry is undergoing treatment at the Federal Medical Centre, FMC, Owerri.
The former IBC staff, who also worked in Hot FM, Owerri and part of Osiza FM radio, Owerri was surprised to be condition that has seen him had one of his legs amputated and been in the hospital for more than a month.
Iwu who suffered complications related to diabetics has spent weeks at FMC where he had his legs amputated to save his life.
A jolly good fellow, Iwu said in Owerri, “this whole thing happened suddenly and it is a big surprise to me. I never saw this coming. And I never also knew that a day will come in my life I will be in such condition”.
Speaking further on his ill health, Iwu  whose voice was a regular one in Osiza FM before he got ill stated, “I give glory to God for having one leg left with me now, which the doctor have assured me they will do all within their power to save to enable me live”.
On his plight, Iwu said that he needs money for survival adding that the state government should also come to his rescue with payment of 11 years salary arrears and 45 months unpaid pension allowances.
Iwu continued “I’m owed 11 years salary arrears.
“Since 2013-2019 during Okorocha’s regime, I was owed pension arrears which amounts to 45 months. Since then, I have not been paid a dime until 2020 when I was paid only three months (Jan-March). And no more ever since.
“I am pleading that the state government should pay me all those entitlements and make available my pension too.
“The governor should kindly help facilitate the immediate payment of them all. To enable me take care of my post amputation rehabilitation and other necessities”.