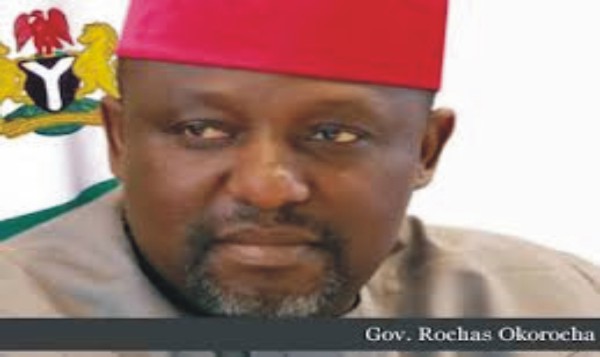 .
As the former Imo State Governor, Rochas Okorochas continues to make news headlines for the wrong reasons, following the recent revelation of all manner of administrative atrocities committed by him, his family and cronies during his eight years reign as governor against the good people of Imo and his immediate constituency, Ideato.
A prominent blue blooded son of Ideato south, Prince Nixon Okwara of Isiekenesi ancient kingdom has taken a swipe on this embattled former governor over what he called a disgraceful, heartless and selfish eight years reign. He submitted that Okorocha can be likened to  the biblical. Saul who was anointed king of Israel but out of atrocities against God and man and uncontrollable power intoxication, the grace of God departed him.
The Isiekenesi born real estate magnet and security expert stated this in a chat with newsmen at the Sam Mbakwe Cargo Airport, Owerri during the week, he cited the recent revelations and grabbing attitude of the Okorocha and his family members by the white paper of a competent judicial panel of inquiry on land use in Imo State; as a sin against the living and the dead.
Prince Nixon insisted that such inglorious act only exposed how wretched , greedy, selfish and fake Senator Rochas Okorocha is, in spirit. He also averred that both Ideato people and Imo State in general deserve open apology from Senator  Rochas Okorocha for betraying their trust and inflicting pain and untold hardship on them.
Speaking further, the Crown Prince chides all Okorocha’s aids especially his Principal Secretary, PS, Dr Paschal  Obi, who was a civil servant that rose to the rank of a Permanent Secretary for advising, aiding and  abetting Okorocha in destroying all sector of Imo economy and frustrating their Ideato kits and kins.
On the issue of Okorocha’s presidential ambition, Prince Nixon said is a joke taken too far and a laughable because Nigeria has not degenerated to a state of fools that do not have sense of reasoning or remember events. “How can a man who  mismanaged a state with the recent revelations, be dreaming of becoming the president of a nation  like Nigeria” he wondered.