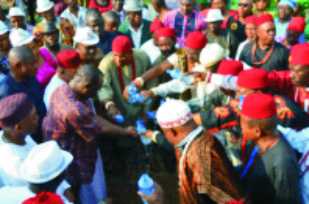 By Okey Alozie
The traditional rulers in Mbaise  land have  been divided into two parts because of the cancellation of curses and libration against their sons and daughters supporting any governorship candidate outside  the three LGAs.
On Tuesday, August 17th 2021, some traditional rulers in Mbaise, comprising those from Ahiazu, Aboh Mbaise and Ezinihite LGA converged at the popular Ahiara junction to cancel and reverse the curses and libration they had invoked or poured against their sons and daughters supporting any other governorship candidate from outside Mbaise nation in 2019.
Our reporter gathered that out of the 91 traditional rulers in Mbaise, not up to 20 of the royal fathers appeared for the exercise.
The other group that did not attend the cancellation of curses at the Ahiara junction on Tuesday 17th of August 2021 are reported to have teamed up with some concerned Mbaise personalities and other socio-cultural organizations in Mbaise land to battle the few Ezes that were physically seen at the junction (Ahiara).
Our source revealed that the action of the Ezes have raised concern over the action of the colleagues thereby fuelling tension.
Both sides as Trumpeta gathered are now attacking each other verbally. While present political appointees in Mbaise are in support of the traditional rulers that went to Ahiara junction, traditional rulers who did not want to curses cancelled appeared to be in majority and also have upper hand because of their greater number. This particular group it was gathered have support of President Generals and other community leaders of Mbaise nation.
Trumpeta was told that the few traditional rulers that went for the cancellation of curses and pouring of libration did it to support the government of the day and to protect the political appointees of Senator Hope Uzodinma, Governor of Imo State.
The political appointees from Mbaise numbering over 15 are said to have influenced the action of Ndieze.