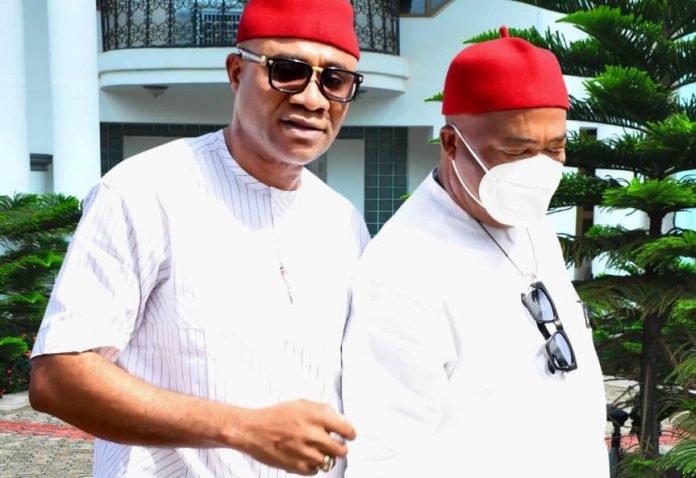 By OnyekachiEze
Former House member for Oru East State Constituency, and the current Commissioner representing Oru East Local Government in the Imo State Oil Producing Areas Development Commission, ISOPADEC, Hon. Nkenna John Nzeruo has extolled the State Governor, Senator Hope Uzodinma for running a transparent administration.
The Governor was also showered with accolades for maintaining the cardinal principles of rule of law, checks and balances, which are said to be the bedrock for the recorded milestone within a short period of less than two years of his enthronement.
Speaking with Journalists in Owerri shortly after a State function, the ISOPADEC Commissioner who represented Oru East State Constituency in the 8th House of Imo State House of Assembly thumbed up for Governor Uzodinma for changing negative narratives people had in Governance and her Leaders.
Hon. Nzeruo described the Governor as a worthy Leader, with the vision and mission of salvaging the State.
According to him, Uzodinma has already surpassed his predecessors, especially in areas of transparency and accountability.
Nzeruo posited that unlike in the past, Uzodinma has succeeded in making judicious use of Imo State resources in developing the State.
The ISOPADEC Commissioner further submitted that presently, available records have proven that all the monthly allocations due to the State from the Federal, and revenue generated by the State are being put into good use for the overall interest of the citizenry.
Hon. Nzeruo also stated that in maintaining one of his major campaign promises of not looting Imo State patrimony, Governor Hope Uzodinma has continued to live up to expectations, hence running a transparent Government.
The erstwhile Parliamentarian maintained that the chief driver of the 3R mantra of the present administration within less than two years on the wheel has history with Imo, as a Governor that restored the people’s confidence in the act of Governance.
Nzeruo also known as “Ikukuoma” recounted that over 50 solid roads have been fully constructed across the State, while others are still under construction.
Reconstruction of health centres, schools, and industries were not left out, as he expressed satisfaction that all monies belonging to the State are channeled on relevant things.
Continuing, Hon. Nkenna Nzeruo opined that, in contrary to what Imo people used to witness during past administrations, Uzodinma on assumption into office enshrined and has continued to operate an open door policy, by meeting and interacting with the masses especially, stakeholders across party lines as well as getting to hear directly from them in a bid to ascertaining their needs/want, and finding possible solutions to them.
The Oru East born politician averred that the Governor has not only ensured compliance to rule of law, but has followed it up in ensuring that the Treasury Single Account, TSA, is into use without compromise.
Nzeruo hinged that for egocentric Leaders, whether or not the TSA is practiced or not, wouldn’t be their problem, but for Uzodinma, giving periodic account of every dime that enters into The State treasury/coffers is a priority.
He recalled that the Governor in his proactiveness has remained resolute in saving and utilising all funds from ISOPADEC, ADAPALM, for the purpose of development and adequate welfare of the Areas.
Hon. Nkenna Nzeruo said, “His Excellency, Senator Hope Uzodinma is shocking detractors on daily basis with achievements. He is not relenting in both human, capital and developmental projects.  Imo money is now in safe hands, who is ensuring that every fund is channeled to the original purposes”.
He added, “As a democrat, who respects people’s rights and opinions, the Governor has not failed in carrying all along. The stakeholders meeting, LGA visits were his arrangement to speak directly with the masses down to grassroot. Such is a mark of a Leader, a part we have never had without deception before”.
However, he called on all political Leaders and opposition to close ranks and join in the mission of making Imo greater than ever.
On the foregoing, political appointees and those yet to be appointed to the State Government are hereby charged to be good ambassadors wherever and in whatever they do.
Further buttressing on the numerous achievements of Governor Uzodinma, Nzeruo reminded all the appointees, irrespective of their portfolios to quit acts capable of brewing bad name to the Government, as well as to the Governor.
Also, he urged the aides to shun egocentric behavior, stressing that their target shouldn’t be what to gain or for self aggrandizement, rather for the service of Ndi Imo, geared towards the development of the State for posterity sake.