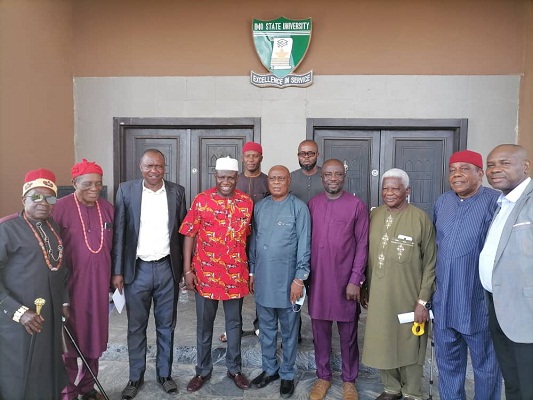 Trumpeta had exclusively reported about the implementation of the Visitation Report which has witnessed a Tsunami in the institution.

A Visitation Panel set up by the state government had recommended for various degrees of sanctions to sack of teaching and other categories of workers found wanting.

Apart from outright dismissal, suspension and retirement meted to those found wanting, others were handed wanted based on the report.

As implementation of the report is going with some of the affected victims at the receiving end, Trumpeta learnt that the exercise may have been put on hold for now.

Signs that the exercise may not continue have been traced to a particular case involving a lecture in the Engineering Dept.

Trumpeta learnt that based on the recommendation of the panel, teacher in institution, Dr Micheal Anumaka was among those said to have been recommended for sack over alleged forgery.

There had been a kind of mixup in the academic records of the former Head of Department of Electrical Electronics Engineering were his was accused to have obtained O’ Level Credit in Mathematics in 2014 WAEC GCE the same year he got his PhD certificate.

According to what Trumpeta learnt, a government visitation panel on the university after a review of his case concerning his certificates and employment records recommended for his dismissal from the service of the university.

However, Trumpeta observed that the implementation has been put on hold and those recommended for various sanctions yet to know their fate.

Trumpeta was informed that a supposed letter from the state government for the review of the visitation panel’s report put the exercise on hold.