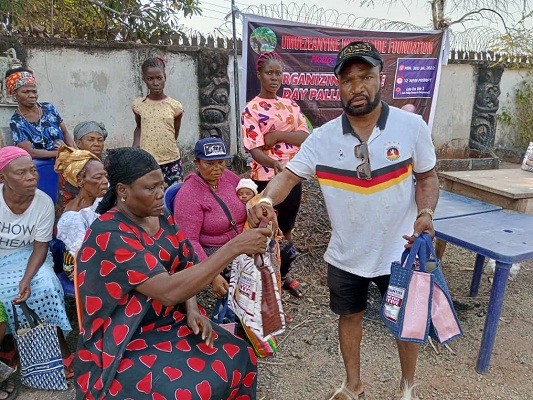 Held at the late Eze Udo 2 compound of the locality, the Group under the aegis of “Umuezeanyike Worldwide Foundation” doled out gift items to all and sundry as a way of celebrating the Christmas and New year festivities.

Also shared were bags and other Palliatives.

Addressing newsmen, the President General of Umuezeanyike Worldwide Foundation, Sir Bright Emeka described the Group as a non-Governmental, non profit Organization, which is basically saddled with acts of Charity.

He said as a Humanitarian Foundation, the motive to embark on such gesture was born out of their passion to celebrate their loved ones at home, knowing that it had not been easy on the recent state of unrest.

Sir Bright opined that the Palliative was targeted at reaching the poorest of the poor, and the destitute,which he expressed delight how it went simultaneously.

“Onye-nwe-ego” as fondly called said, “We have the vision of impacting on humanity. Umuezeanyike Worldwide Foundation thought it wise and today it came to fruition”.

Speaking further, the elated Bright remarked that there was no discrimination from the sharing, as both men, women and children who came at the venue left with the Palliative bag.

Admonishing his people, Emeka urged them not to lose hope in life, irrespective of the predicament, rather, should be optimistic of Divine Providence.

He however charged them to remain resolute and pray for their ones abroad for the enablement to do more, even as he assured of its continuity.

He averred that, for the fact the women and children were happy, they too are satisfied.

Chief Ike maintained that the joy won’t be complete if the people at home are not well fed and cared for, hence, the exercise.

In their respective speeches, some of the beneficiaries Messrs; Agnes Ikegwuruka, Edith Ezeala, Esther Odoukwu, Ogechi Ezeala, and Mr Vitalis were full of joy.

They pinpointed that never has it been heard that such Palliative was given to them before, and in such a friendly manner.

The beneficiaries however prayed God to bless the givers with good health, long life and more riches.

Meanwhile, Trumpeta reliably gathered that as part of their own support, the following graded the road leading to their community. They are; Honorables Amaechi Duru ( Ama Eziama), Ray Adindu Obialor, and Ebere Uzoma.

Interestingly again, Hon Amaechi Duru was said to have donated the bags also shared to the women.

The Community people while assessing the program attributed it as a top notch in the history of Eziama, Isiala Mbano LGA.