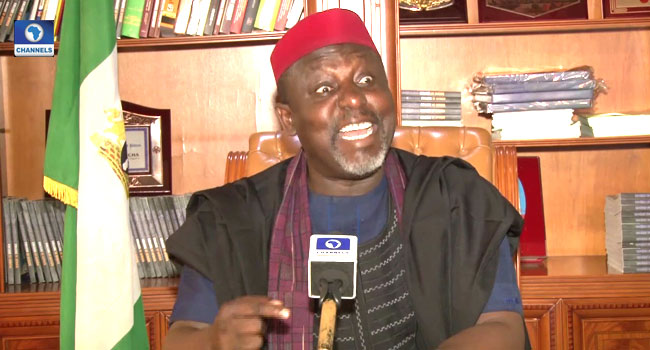 The Senator representing Imo West (Orlu Zone) at the National Assembly, Abuja, Senator Rochas Okorocha has taken a swipe at his successor, Governor Hope Uzodimma over his inability to reveal the identities of those behind the killings in Imo State.

Also angered was the perceived attacks meted out on him and his household by the incumbent Imo State Government.

In a media parley with Journalists in his Spibat mansion, Owerri, on Wednesday January 5, 2022, the former Governor dared Gov Uzodimma to come out openly and tell Imo people what he (Uzodimma) knows about the numerous killings across the State.

He said it was laughable how Uzodimma after many announcements that he would name those behind the unrest in the State failed to do so, but rather remembered to hand it over to the Police to investigate.

Okorocha described Uzodimma’s inability to do so as another form of inconsistency, lies and deceit, which he said been a norm since the Oru East born politician ascended the Governorship position.

Senator Okorocha boasted that within the 8 years he was Imo Governor, there were massive development and peace.

He told newsmen that since Governor Uzodimma failed to do the “Naming ceremony”, he (Okorocha) will help him do so, and let the World know of the happenings in Imo State under the 3R administration.

Rochas Okorocha queried Uzodimma to, as a point of duty as Governor tell the public who killed Ahmad Gulak in Owerri, who sent for the abduction of his son-in-law, Uche Nwosu inside the Church, who is behind the killings of Traditional Rulers in Imo, who is behind the killings of over 140 persons at the Owerri FMC morgue as was also confirmed by the Owerri Archbishop, as well as those behind the beheading of individuals and cannibalism in some parts of Imo?

Speaking further, the President of Rochas Foundation Group revealed that inside the Imo State Government House under Uzodimma, there is an alleged killer squad known as “Hopism Strike Force”, comprising of both the Army, Airforce, Police, and Ebubeagu.

According to Rochas, Senator Hope Uzodimma is their Chairman, while others take instructions directly from him.

He alleged that those security men in the said Hopism Strike Force were not assigned and known to the authorities, but were conscripted by the Governor who orders them to be doing some shoddy jobs.

Furthermore, he disclosed that while the Inspector General of Police is on top of the attempted abduction of Uche Nwosu, Uzodimma’s Chief Security Officer, Shaba had been in police net for the past four days, even as he said the Governor has publicly denied knowing him.

Revealing further, the two term Governor said, the same man who mentioned Uche Nwosu’s name as one of their financiers was brought down to Imo Government House from Delta State, and was forced to name Uche Nwosu during an interview at the Rockview hotel, Owerri.

Okorocha maintained, “Imo State is in serious bondage, the whole world should come to their rescue. Nobody should trivialize what’s happening in Imo State to political animosity, even in families, they are bound to agree and disagree at times talk more of party, but that doesn’t equate to killing of people.

“I can’t dirty my hands. I am to speak to save the lives of the people. Hope Uzodimma tells petty lies which make people to lose confidence in Governance. My worry is not only about the lives lost, but how Hope is painting the image of the President Buhari, Imo State, and Nigeria bad. The Police, the Presidency and Nigeria have been put in a mess since this Government came on board”.

On his 2023 Presidential bid, Senator Okorocha accused Uzodimma of being a paid agent sent to scuttle his ambition by all means, expressing optimism that neither Uzodimma nor his cronies are God who destines man for higher positions.