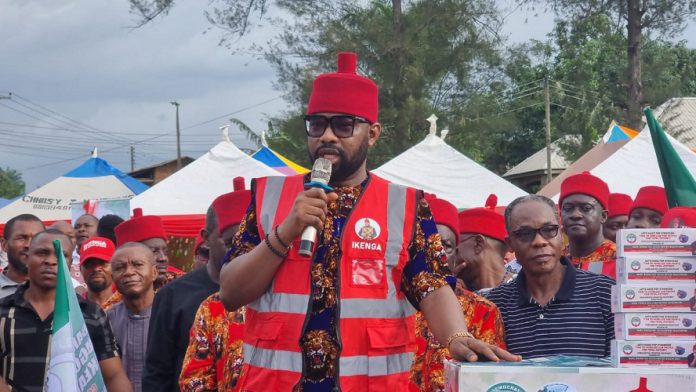 After the failed attempt to scuttle his political ambition, indigenes of Ideato nation over the weekend trooped out, en masse to formally receive their son, Ikenga Imo Ugochinyere in an elaborate event.

The stakeholders did not mince words in conveying their position ahead the PDP primaries, that Ikenga Imo Ugochinyere is the consensus candidate for Ideato nation.

Echoing the position of the stakeholders at the event, the master of ceremony, Chief Rawlins Obieri conveyed that, “what the stakeholders have said is that we have one candidate for the Ideato Federal Constituency seat and he is Ikenga Imo Ugochinyere and if you have a friend or brother aspiring to run for the same position, please advise him or her accordingly in the greater interest of Ideato Nation. We are no longer searching; we have found the man for the job.”

The jubilant crowd at the event went wild on sighting Ikenga for the first time since the reaffirmation of his qualification by the National leadership of the People’s Democratic Party (PDP) and clearance to participate in the forthcoming primaries of the party for the Ideato federal constituency.

Ikenga Imo Ugochinyere, former aide to the former Senate President, Dr. Bukola Saraki and former President, National Youth Council of Nigeria, was literally accorded a heroic reception by his people, drawn from the 27 wards of the two council areas that constitute the Ideato Federal Constituency.

At the event which took place at the premises of St John’s Anglican church Osina, Ikenga charged his people to remain vigilant until victory is won and to vehemently resist and deal decisively with anybody who might attempt to steal, abscond with, or falsify result sheets again in the coming primary election.

An overwhelmed Ikenga, who was visibly pleased with the intimating crowd that received him said: “the PDP does not belong to a single individual, so do not allow anybody to intimate you in a party you labour for. There will be no more name-dropping and those still hanging around Abuja stealing and falsifying results should retrace their steps as they will no longer be allowed to have their way.”

He attributed the lingering security challenge in the South-East to the people’s perceived sense of marginalization and urged President Muhammadu Buhari to adopt the political option and enter into dialogue with the Indigenous People of Biafra (IPOB) and leaders of the South-East to find lasting solution to the security challenges plaguing the region, just as the Federal Government had done with the Niger Delta Militants and the Boko Haram terrorists.

Ikenga Imo Ugochinyere also commended Prof. Chukwuma Soludo for the courage to visit the detained IPOB leader, Mazi Nnamdi Kanu in the detention and enjoined other governors of the South-East to emulate his example, instead of just trying to     ineffectually please some paymasters in Abuja.

Highlights of the occasion were the donation of materials and cash worth over N40million by Ikenga, in support of the party’s e-registration and mobilization efforts in the Ideato Federal Constituency.

The event was wrapped up with a solidarity march staged by Ideato Youths in honour of Ikenga Imo Ugochinyere. The youths in company of Ikenga, marched from St. John’s Anglican Church, Osina to Akokwa town in Ideato North council area.