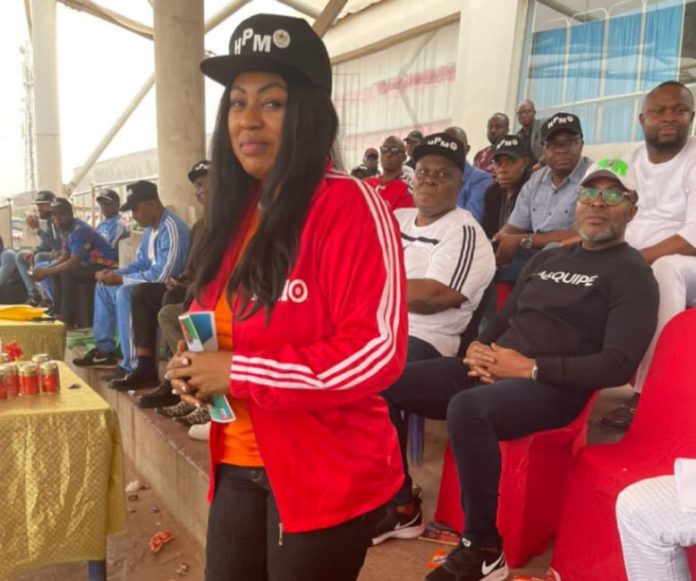 It was jubilation galore in Okigwe/Onuimo/Isiala Mbano Federal Constituency, in Imo State, as the women folk across party lines celebrated the emergence of Hon Princess Miriam Onuoha as the candidate of All Progressive Congress, APC for the 2023 general election.

Also joining in the celebration were sons and daughters of the Federal Constituency living in the United States of America.

Expressing her gratitude to the Delegates, Hon Onuoha who emerged unopposed thanked the Delegates for the confidence they have in her, and pledged not to disappoint them.

Princess Onuoha who is already the incumbent Lawmaker in the Federal Constituency disclosed that for contesting the primary without an opponent is a vote of confidence on her person by the Good people of the Federal Constituency, and vowed that rather than slow down in her service to the Constituency, she will now double her efforts in providing dividends of democracy to her constituents, because to whom much is given much is expected.

She described the people of Okigwe/Onuimo/Isiala Mbano Federal Constituency as people with a heart of Gold, pointing out that their support continues to propel her into more ventures that will benefit her people.

The Female Lawmaker also known as Mama Sure-P said that it was historic that she picked the ticket of APC for a return to Abuja, but emplored her people to now look towards the main election since the issue of primaries are over.

Speaking to Journalists, Dr (Mrs) Ebere Njoku from Okohia, Isiala Mbano LGA said that Princess Onuoha’s victory is for all women in Imo State, devoid of political leanings, saying that even though she is not a member of APC, she will work for Onuoha, as she now represents the Women of Okigwe Zone in particular and Imo State in general in the Green Chamber.

“We shall support her. This has nothing to do political party. Rather we are going to back one of our own. A woman who has been doing well among women in the National Assembly should be supported more to do more” she said.

For High Chief Iyke Bruno Onyeso who spoke from United States of America, USA, the victory of Princess Onuoha is a good omen of better days ahead, adding that since she won her first tenure, Princess has not relented in providing dividends of democracy for the people of her Federal Constituency.

Chief Onyeso is optimistic that Onuoha is going to achieve more for the constituency for having acquired enough experience with her first outing in the National Assembly, which he said is for the advantage of people of Okigwe/Onuimo/Isiala Mbano who should be proud of their Daughter.

He vowed to continue to mobolise those in USA to give their support to Princess Onuoha, adding that he has no personal interest except for good governance and welfare of the people.

“I am happy she picked the ticket again. She deserves it and we should all support her” the American based Philanthropist said.