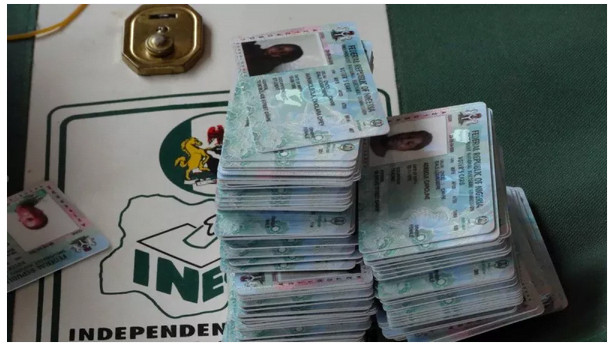 The Government of Imo State, led by Senator Hope Uzodinma and the Peoples Democratic Party in the State have been at each other’s jugular, following alleged plan to inflate Independent National Electoral Commission INEC Register.

A candidate of the PDP, for Ideato Federal Constituency, Imo State, Ikenga Ugochinyere  had raised alarm in a Press conference in Abuja, that there is plot to bloat the INEC voters register in twenty States in Nigeria, mainly in Omuma Ward, Oru East, Imo State, which is Governor Hope Uzodinma’s voting Area.

Ikenga Ugochinyere brandished some documents to buttress his allegation.

He maintained that the INEC register in the home of Imo State Governor, Senator Hope Uzodinma has suddenly jumped from six thousand voters, to nearly fourty thousand, and  asked that INEC should explain why such change within two years.

However, the Imo State Government countered by accusing Ikenga Ugochukwu of trying to cause a breach of security in the State by raising false alarm.

In a release by the Commissioner for Information and Strategy, Hon Declan Emelumba, he said that Ugochinyere should be arrested by Security Agents immediately.

Emelumba said that the offence committed by Ugochinyere could be described as Treason, for circulating false story which could cause trouble in the land.

However, Emelumba who could not deny or confirm the allegation said that it would not be out of place if the voters register of Omuma of community increased, since according to Emelumba, a lot of people have moved into the Area following some Government Establishments sited in Umuoma since Uzodinma became Governor.

The Peoples Democratic Party, through its State Publicity Secretary, Comrade Collins Opuruzo warned that showed anything happen to Ikenga Ugochinyere, the Imo State Government would be held responsibility.

The Party said it was not surprised that Imo Government will leave the message and go after the messenger, pointing out that should not have threatened  Ugochinyere, if Imo Government has any superior argument to counter the heavy allegations from Ugochinyere.

In another connection to the matter, the “Whistle Blower” Ugochinyere said that there is a case filed in a High Court to stop INEC using electronic system to conduct elections in Imo.

Unfortunately, the name which was used as the plantiff in the matter has in a letter, denied being privy to the suit, and threatened to go to court to clear his name, for being impersonated by a person yet to be identified as the perpetrator.