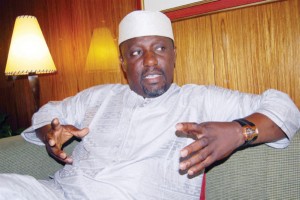 Vice chairman of the House of Representatives’ Committee on Customs, Hon (Barr) Kingsley Chinda has reacted to the call by the North for upward review of the revenue allocation formula in their favour ,  saying  that there was no basis for such review as  Northerners own between 75%  and 80% of the country’s oil blocs as  against Niger Deltans’ less than three percent ownership.

Hon (Barr) Chinda said rather than increasing the allocation to the North, any such review of the country’s revenue formula  should be in favour of the Niger Delta region that produce the oil and viewed the position of the North as a ‘wake-up call’ for  Resource control.

Speaking with The Tide  in Abuja, Chinda who represents  Obio/Akpo federal constituency  called for a reversal of the ownership of the oil blocs in the country, describing the North’s dominance  as injustice, which he said is ‘unacceptable’ and  wondered why Niger Deltans should continue to receive ‘13% derivation and 87% deprivation’ till date.

Chinda punctured the North’s argument that Niger Delta states benefit more from oil, saying “facts revealed that individually, non-Niger Deltans enjoy more of the resource from oil – as a list of owners of oil blocs in the country reveals about 75-80% from the North and less than three percent from the Niger Delta”, adding “this is completely unacceptable and must be reversed now that the issue of revenue derivation has been brought to the fore front by the North themselves”.

He continued:” I will say that it ( the North’s call  for review of the revenue formular) is a wake up call on the South-South, particularly the Niger Delta – that we ought to claim our constitutional and infact, natural right to our resources. It’s a call to conscientize us  on the very germane issue of Resource control. The fundamental question we must ask at this point is:”Why accept 13% derivation and 87% deprivation?”

“It must be noted too that the constitution did not state that derivation should be 13% but that it should be a minimum of 13%. Why must we accept the minimum? It could be 100% which is the maximum. I will therefore call on all oil-producing states to see this as an opportunity to redress the economic anomaly  that exists in our polity,” he said.

He added that, “Even the National Political Reform Conference of 2005 which was midwife by the Chief  Olusegun Obasanjo’s  adminisratation  recommended an upward review from the 13% derivation which was not far- reaching enough and therefore was rejected by the oil-producing states,”

Hon. Chinda who distinguished himself in the 7th  House by producing the highest number of bills so far contended that if a historical excursion is taken into the  Nigerian derivation sharing formula, when the mainstay of the country was agriculture, the wealth from the groundnut pyramid was not brought to the central purse as they  rather paid tax to the Nigerian  nation.

“Today, the mainstay is oil and we are denied the wealth and given peanut. This is not justice and cannot be justice”, he maintained.

Hon. Chinda further asked,” What is the current reality? The Geese that lays the golden egg is neglected and impoverished and is gradually dying, we need to heal it. I call for an intellectual struggle to unshackle the Niger Delta from the Nigerian bondage, our people are living in penury, our cities are degraded. It is becoming clearer that we don’t have a Nigerian nation but a marriage of convenience between various nations. I shall raise the issue on the floor of the house if the house will be bold enough to debate same and reach a resolution”.

It would be recalled that governors from the 19 northern states on Thursday, February 23, called for a review of the revenue allocation formula “to reflect current realities”. Chairman of the Northern Governors’ Forum and governor of Niger State, Governor Babangida Aliyu said this in Abuja while inaugurating the Advisory Council of Sir Ahmadu Bello Memorial Foundation and the call was supported by the North’s socio-cultural organization – the Arewa Consultative Forum (ACF).