Adding the his administration is adopting a radical approach to governance to enable the people enjoy the dividend of democracy, the governor further disclosed that a befitting cultural centre will be erected in the three zones by his administration to strengthen the organizations and promote unity.

Speaking on behalf of the Owerri peoples Assembly Chief Iwuanyanwu is now convinced by the genuine intention of the Governor Rochas Okorocha to decentralize power and further ensure that the people enjoy the dividend of democracy at the rural communities. He described the Governor as a democrat as he has taken the initiative of inviting stake holders across party line to brain storm on how to move the state forward.

Chief Iwuanyanwu further said that with the involvement of stake holders in policy making, Governor Okorocha has embarked on the journey of rewriting history of the state by enthroning good governance.

Speaking, the leader of Okigwe zone RJK Onyewuchi admitted that the fourth tire government will guarantee a total transformation of the state as well as create specific role for relevant stake holders in the business of governance.

Chief Onyewuchi who spoke on behalf of Okigwe Zone under the platform of Odinma Okigwe  stated that Governor Okorocha has demonstrated a strong political will to bring development at the door step of Imolite through the concept of the fourth-tire government, He commended the government for his developmental strides and urged him not to relent in the on going transformation of Okigwe town.

Speaking also the leader of Orlu – zuru- me Bar. Robben Okoro said that the fourth – tire government is another practical means of returning power to the people he said the idea will ensure that the dividend of democracy are equitable distributed as well as address the issues of marginalization in the state.  Barr. Okoro noted that the participation of cultural organization at the zonal level under scores the ingenuity of Governor Okorocha in the implementation of the policies and programmes of the Rescue Mission.

Earlier the Governor had explained to the state holder under the platform of the Imo Elders Forum the frame work and over – all concept behind the fourth tire Government he disclosed that his administration would involve socio – cultural organizations in the three zone in fourth –tire Government otherwise known as community Government Council to achieve the desired goals.  The Organization according to the Governor are, Owerri peoples Assembly, Odimma Okigwe aqnd Orlu zurume for Owerri, Okigwe and Orlu zones. 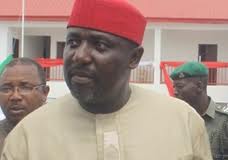