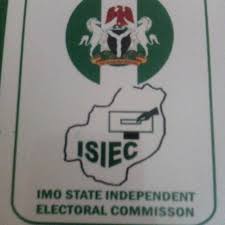 The chairman of the Imo State Independent Electoral Commission (ISIEC), Barr Julius Onyenucheya has opened up on issues related to creation of wards and the conditions therein in relation to councillorship and chairmanship elections in the state.

ISIEC boss made the declaration in his office yesterday.

According to him, ISIEC wards created in the past by the Achike Udenwa era stand dissolved.  Onyenucheya also stated that his office has make a public request for all the communities who  applied and are interested  in  the creation to come up with the requirements before they will be given the chance to participate in the councillorship  and chairmanship elections.

The ISIEC boss listed some of the requirements to include 5,000 votes registration, 5 electoral polling units, public institution, schools, church, market.

He also noted that the commission has scheduled to kick start the exercise on Tuesday 10th of September 2019 with Ihittee Uboma as first point of call. Obowo also follows at their different council halls for verification, Wednesday 11th September 2019 for Ehime Mbano and Isiala by 1:30pm while Okigwe and Onuimo will also be by 1:30pm for their own verification as he said that other programs we be made known to the public soon