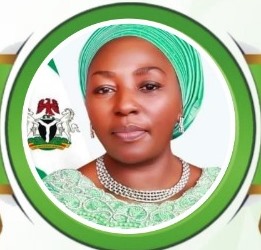 By Okey Alozie
The wife of the Governor of Imo State, Lady Ebere Ihedioha has pledged to create room for gender preference as well as to fund the activities of women who are contesting for elective positions.
The first lady made this promise when members of Nigeria Association of Women Journalists (NAWOJ) Imo State chapter visited her few days ago at Imo Government House.
She advised the women to have strong passion to succeed in life, adding that she will fund activities of women who are contesting for elective positions so that more women will be in power. She further advised them to be focused and diligent in order to excel and attain greater heights in their areas of specialization.
She appreciated the female Journalists for being the voice of the women and promised to support them in their fourth coming programe and to make their organization grow.
Earlier in her address the chairperson of the association Barr. Vivian Otti appreciated Lady Ihedioha for giving them audience. She noted that the Association was inaugurated in the year 1989 for all practicing female Journalists with the aim of empowering and protecting women and girl child.
Otti promised that the female Journalists in Imo State will give Her Excellency full support to succeed in office. She also used the opportunity to solicit for partnership in the area of subvention from the government.
In a related development, wife of the governor flagged off the unveiling of women in public service.
The flag off was done at Ahiajioku Convention Centre Owerri few days ago.
Aims and objectives of the association include, to accelerate the realization of the sustainable development goal of gender equality and the empowerment of women, increasing women participation in politics and nation building, providing a forum for mentorship of young women, enhancing women education, provide a veritable platform for women in public service to excel, to motivate younger women to strive for excellence and institutionalization of positive change.
Some male civil servants who reacted on this development accused the women in public service of plotting to use their forum to dominate management positions in the public service, adding that Imo female civil servants want to hijack the public service in future.
Since the creation of Imo State, four women have been at the position of head of service.
From all indication more women will come out to participate in active politics in 2023.
A woman have also predicted that Governor Ihedioha will hand over to a female politician.