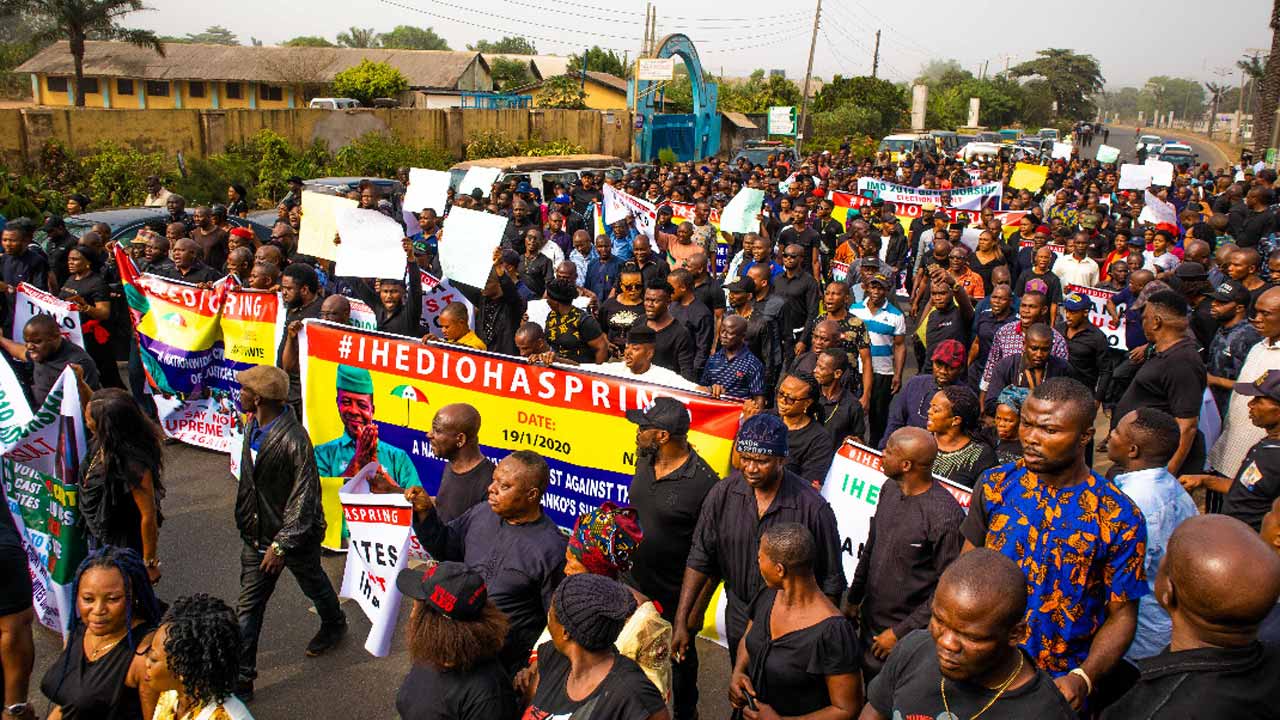 The last has not been heard of the Imo Governorship tussle, as the Peoples Democratic Party, PDP, and Former Governor, Rt Hon Emeka Ihedioha are poised to Approach the Supreme Court to review its decision on the Imo Governorship Election Matter, which the court announced Senator Hope Uzodinma as the winner.
On Tuesday, January 14, 2020, A seven man Supreme Court Panel in a unanimous decision affirmed that Senator Hope Uzodinma of All Progressive Congress, APC, who was announced fourth by the Independent National Electoral Commission INEC in the March 9, 2019 Imo Governorship election was the winner.
In the official results released by INEC, the electoral Body said that Ihedioha of the PDP polled 276,404 to come first, while Uzodinma of APC got 96,458, and was announced fourth position.
However, Uzodinma approached the Tribunal that he won the election, but was short-charged because his alleged votes from 388 polling Units were not added for him.
The Tribunal struck this argument out, so also did the Appeal Court, but with a minority Report from one of the judges supporting Uzodinma’s argument.
On Tuesday January 11, 2020, at the Supreme Court, the Judges, led by the Chief Justice of the Federation, Justice Tanko Mohammed granted Uzodinma’s request by adding the figures from the alleged 388 polling units and allocated the numbers to Uzodinma making his total votes higher and above that of Ihedioha.
Following this controversy, the PDP and Ihedioha are approaching the Supreme Court with a “Petition” for the Court to explain to them how it arrived at the figures that was announced for Uzodinma.
PDP in the petition said uptil now, it was yet to know the exact number “allocated” to Uzodinma since the court was yet to produce the judgment for public consumption.
The party said that even if Supreme Court wants to allocate votes to Uzodinma, “were the votes endorsed by INEC as approved by law to make such votes valid and authentic?”
Part of the petition by PDP and Ihedioha reads; was it only Uzodinma and APC that participated in the 388 polling Units, to warrant Supreme Court to allocate all the votes to Uzodinma?
What was the figures from each of the 388 pollings Units?” the party asked adding  that the Supreme Court was not smart enough to cover its flanks as the number of the votes they bandied about do not tally.
The party and its candidate said from the records Supreme Court released.  It “Over voted” Senator Hope Uzodinma, because what INEC has as record for Imo election defers from the Supreme Court Votes.
PDP said “According INEC Records, total accredited votes in Imo was 823,743, valid votes were 739,485, cancelled votes were 25, 130 making it at total of 714,355 votes”.
The party went on “At the Supreme Court, the total valid votes increased to 950,952.  This accounts for 127,209 votes in excess of the total accredited 823,743 votes”.
Therefore, PDP is praying the Supreme Court to explain to her where it got the excess 127,209 votes.
“This matter is for all Nigerians. It is not just for PDP or Emeka Ihedioha, but to put the records straight so that this does not happen in the history of Nigeria judiciary and electoral process again” the PDP said.
On whether the Supreme Court can reverse itself, the PDP quoted various authorities where the Supreme Court reversed itself, saying that after all the panel is populated human beings and therefore bound to make mistakes.
However, a source from the Governor Hope Uzodinma led Imo Government told this Newspaper that the Governor is not the Supreme Court that made the declaration adding that all Uzodinma did was to approach the Court for justice, stressing that he does not see the Supreme Court reversing the Imo Governorship matter, and asked Imo PDP and Rt Hon  Emeka Ihedioha to join his friend Senator Hope Uzodinma to move Imo State forward.
“The truth is that the issue is concluded. The Supreme Court is last Court in the land, and it has spoken. It is final and no going back.
The earlier Ihedioha and PDP digest this fact and move on the better” the source said.