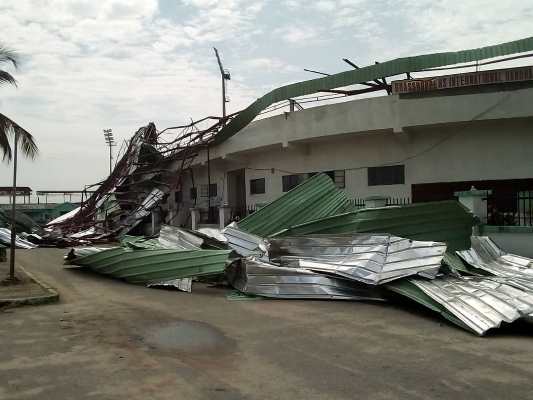 Tragedy was on Tuesday averted at the Dan Anyiam Stadium, Owerri when a wild wind blow-off the roof of the Grasshoppers Int’l Handball stadium.
The incident which occurred at about 6:45pm following a heavy down pour took some workers of the Imo State Sports Commission and shop owners at the Dan Anyiam Stadium community by surprise as most users of the facilities in the arena including shop owners had retired from their routine activities.
Reacting on the incident, the Director of Sports, Imo Sports Commission, Mrs Chizotam Aretola expressed shock at the extent of damage the wind caused on the stadium which was recently repaired and earmarked for total renovation by Ihedioha administration.
She thanked God it didn’t occur when athletes were having their training session saying that the commission would be submitting their report on the incident to the appropriate authorities.
It could be recalled that about 4 years back during the regime of Gov Rochas Okorocha, a similar incident also occurred at the same stadium but luckily no casualty was also recorded even after millions of Naira was expended to put the roof.
Some users of the facilities in Dan Anyiam stadium who spoke to Trumpeta Sports desk called on Gov Hope Uzodinma to please in the spirit of his Reconstruction, Recovery and Rehabilitation 3R’s look into the menace with the view of finding a lasting solution to the danger it poses to Imolites especially our athletes.