By Okey Alozie
One of the star witnesses on the 305 Imo State Universal Basic Education Board School SUBEB Building project, Barr Okey Anyikwa on Wednesday entered the witness box for cross- examination. Barr Okey Anyikwa who was the Executive Secretary of IMSUBEB between 2012 and 2013 while at the witness box denied knowledge of the Action Plan and the said 305 school buildings constructed by the Agency. He also denied knowing anything about 91 school building projects, adding that he was by passed in the execution of project in IMSUBEB.
Barr Anyikwa who revealed that he only read of the contract in the internet disclosed that due process was not followed.
He explained that in the ideal situation, the school project was supposed to be initiated by IMSUBEB after which the Action Plan will be sent to UBEC for final approval.
After the approval, IMSUBEB according to him will advertise for the job and contractors will come for it with their tenders.
Those shortlisted for the job will be funded accordingly for the job to commence unlike the 305 building where due process was not followed at all.
He further disclosed that in the real sense, he should have been the one to handle the correspondence of the project because he is the administrative officer of IMSUBEB.
Okey Anyikwa maintained that his eyes never saw any of those buildings mentioned above neither did he hear of the amount involved “I only red the whole thing in internet” he submitted.
Speaking further, the former IMSUBEB secretary declared that he had no problem with his Boss Dr Mrs Uche Ejiogu on the issue of White Label Company. He also said he read about the companies only in the internet, insisting that the contract never passed through his office at all.
In his words “I only knew that State government some time ago decided to build 305 schools to enhance Education since it was its cardinal policy during the rescue mission administration”.
Speaking further, he hinted that he did not know who initiated the project up till now but believed it was approved but where it was located, he submitted that he did not know. “To the best of my knowledge, what happened was not ideal” he also said.
Continuing Anyikwa said that in an ideal situation, it was the UBEC that ought to come with its team to inspect the project.
The federal government, according to him through UBEC will send teams for supervision. He told the panel that it was Uche Ejiogu who delegated him on what to do.
Anyikwa who said he only worked in IMSUBEB for a year and nine months revealed that he never had any reason to challenge or argue with the Board Chairman, Dr Mrs Uche Ejiogu.
He also said that the Board never complained when it was sidelined. When asked the actual project that at the Action Plan (91 or 305), he answered that it was what the State inculcated and forwarded to UBEC that will be approved, adding that he only signed documents that was approved by his Boss.
Anyikwa denied knowing about the Action Plan which Ejiogu said she came back with.
He admitted that the Board members had meetings for some time but later stopped.
It would be recalled that the 91 schools and 305 building projects had generated a lot of heat in Imo State which led to the past government to set up a probe panel to ascertain the truth. When Gov Emeka Ihedioha left as Governor, Senator Hope Uzodinma came in and continued with the probe. 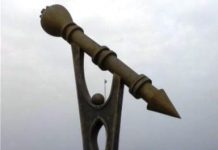 Crisis Looms In Imo House of Assembly .As Members Lament Over Imposition of Principal Officers