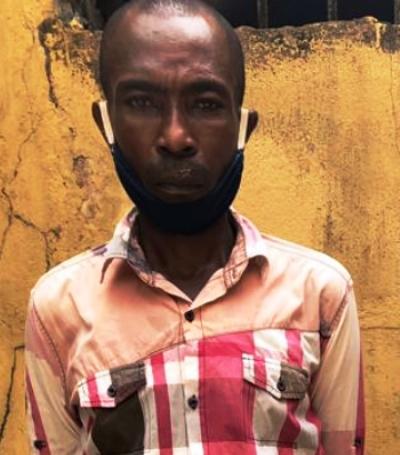 By Tochi Onyeubi
Blood curdling details has emerged on how a man from Ogwa in Mbaitoli LGA of Imo State, had carnal knowledge of his daughter and impregnated her in the process.
In a release by the Police Public Relations Officer, SP Orlando Ikeokwu, the suspect, Uchenna Egbuchulem, a 47yrs old man from Nduhu Alaenyi, Ogwa in Mbaitoli had  threatened to kill his daughter, a 17yrs old Adaku Egbuchulem with a machete if she fails to comply with his demands.
On several occasions, the suspect was said to have forcefully had carnal knowledge of her, leaving her currently pregnant.
Further information revealed that, the mother of the victim and wife of suspect, a native of Ivory Coast, left the marriage and returned back home when the girl was an infant.
“On the 12/5/2020, upon a report received by a Good Samaritan, operatives of the Divisional Police hqrs, Mbaitoli, arrested the above named suspect for forcefully having canal knowledge of his biological daughter to the extent of getting her pregnant.”
“The mother of the girl, a native of Ivory Coast, was said to have left the marriage and returned back home when the girl was an infant. The dad then began to take advantage of her, he was said to have forced her to bed by threatening to kill her with a machete”.
The police informed that investigation has commenced and matter will be charged to court.