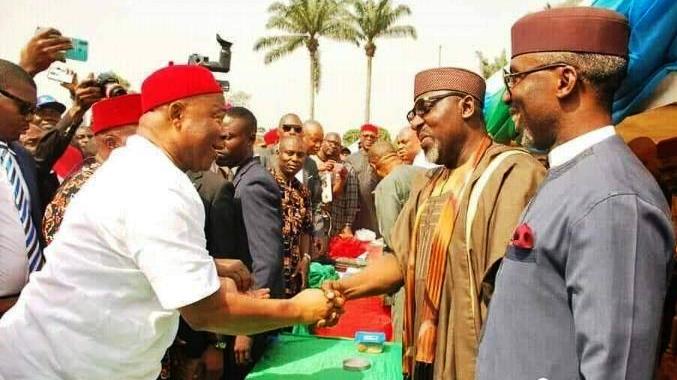 Indications that contractors who worked during the Rescue Mission administration led by former governor, Owelle  Rochas Okorocha, between 2011 and 2019, were ripped off, emerged on Thursday last week , when one of them, Kingsley Onyegbule, the Chief Executive and Managing Director of Kingseoul company Ltd, raised the alarm, at the probe panel, over his unpaid contract which he claimed amounted to billions of naira.

A mixture of drama erupted last week, when Kingseoul, who claimed he is being owed by the then Okorocha’s administration, revealed that even Rt Hon Emeka Ihedioha who succeeded the Rescue Mission Government could not pay him the Billions of naira that he used for the Execution of many contracts in Imo State. He shouted on top of his voice and became emotional which almost landed into serious trouble.

In his words “my expectation now is how to get my billions of money that Imo government is owing me.

“It is now I know why Boko haram came up in this country.

“Nobody is talking about my contract money and how I will be paid.

“Nobody wants to know my problems”

“Let me be frank, this money can make me commit murder, I handled the new High Court project and did 18 and 23 court rooms

He accused the former Chief Judge to have made things difficult for him. He accused him to have brought another person to take over part of his work coupled with other treatment meted to him by the Government.

“Is it bad that I used money to handle Imo contract job given to me. Where did I go wrong since all the jobs that I handled were all on ground for verification.

My good work can speak for its self but Imo government don’t want to pay me” Kingsley Onyegbule submitted at the probe panel”.

At this point, the panel chairman, Justice Iheaka called him to order and almost punished him for releasing his anger on members of the probe panel who were not there when he accepted to work for the Rescue Mission government led by Owelle Rochas Okorocha.

“Do you have your contract papers?

“Do you know that your countenance is contentious and unaccepted by the probe panel?

“You shouted on top of your voice as if we are the cause of your problem” Justice Iheaka maintained.

Another member asked if he submitted letters for payment as other contractors did, but he said no. The panel explained that “it is necessary to know the truth. Make out fact to know who actually cheated.

“Kingseoul may have encounter some problems but that is not why he should disobey the probe panel many a time.

It is on record that he refused to honour the panel in the past. It was at this point Kingseoul lawyer started pleading for mercy.

“We are deeply worried on the conduct of our client this afternoon”, began his lawyer.

Please sir pardon him and temper justice with mercy” counsel to Onyegbule pleaded.

During question time, the commission members drilled Onyegbule on certain issues especially on the transfer of N100m to his Company from Zigreat Company.

Kingseoul explained that he worked for the police headquarter building project along Porthacourt road as subcontractor and the N100m was for the job he said.

According to him, he charged N290m for the job he agreed to work at the police headquarters but Okorocha the then governor of Imo State approved the payment of N250m for the job he was asked to do.

“It was from the total amount that he paid me a part money of N100m which Zigreat transferred to me.

“I don’t know if the police headquarter job belong to Zigreat company or not”.

When asked how he got the job?

“Am ready to provide pictures of all the jobs that I handled.

Many companies were mentioned for him to identify which he accepted to have done transaction with some and somehow denied knowing others.

Some of the companies mentioned include Multiple Global Company, Mayor and Jordan

JP Company, Velranus Company and so many others.