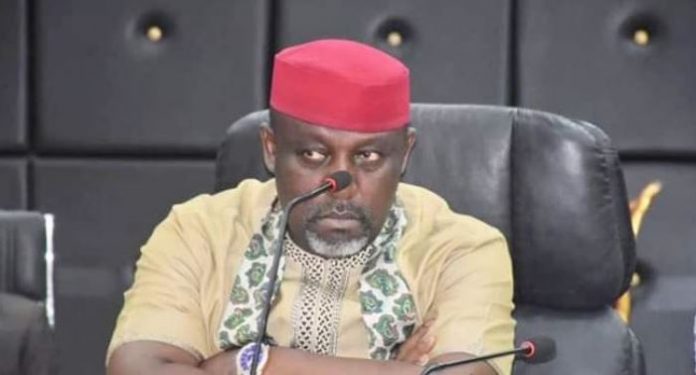 By Okey Alozie
As the Imo State Judicial Panel of Inquiry on Contract led by Hon.  Justice Benjamin Iheka continues to grill contractors on failed  contracts in the state,  more revelations are beginning to emerge on how understand practices were adopted by  the Rescue Mission government of between 2011 to 2019
Making another earth shaking revelations was Mr Jack Afra, a white man and owner of Grandi Project International Company LTD at the panel revealed that due process were not followed in award and execution of the contracts.
He started by alleging in his claims how the former governor of Imo State,  Owelle Rochas Okorocha will pay him one contract and at the same time direct him to use the money paid for one contract to execute many jobs and at the end the former Governor will not pay completely.
He used the  Nekede/Futo Road contact as example.  In his words “the fund available for the Akachi bye-pass road was not enough and Owelle Rochas Okorocha as a result of the variation in the cost promised to create more jobs  for me in order to compensate my company.
“To make it up, he gave me Naze- Futo road, He also gave me the Dualization of Aba road along the line when I went half way on the Futo,  Ihiagwa/Naze Road, he sent Late senator Ben Uwajumogu who was the then Speaker Imo State House of Assembly to take over the Job from me and Uwajumogu did as he said.
“We had a little misunderstanding because, I have gone far in the job.
Uwajumogu asked me to go and complain to Rochas instead of quarrelling with him.
I was surprised that my Job was given to another white man who speaks almost the same language with me.”
Jack said he borrowed alot of money from banks to execute the contract and he is owing the banks because the then Governor could not pay him for the contracts he did for Imo State.
He revealed that Okorocha tricked him to work for him at Lamond Hotel project according to him, the Lamond hotel contract was included in order hotel contracts of Imo State Government House.  Later, the governor, he said removed it from the list and up till now, Okorocha did not pay for him for  the job did at Lamond hotel and private Contracts that were executed for him.

He explained that the 2,300 square metres of the packing lot were all completed without pay. “I did the Job because I thought it was part of Imo Government House job”. Jack further explained.
He begged the panel to help him collect his money from the former Governor, Owelle Rochas Okorocha. Jack hinted that whenever he goes for his money, Okorocha will shout on him with harsh voice adding that, there were many private jobs of Okorocha that came in the name of Government House without people knowing.
Mr Jack presented all his records for execution of contracts given to him in the name of his two companies Grandi and Mid East Construction Company.
Jack said he had written for his money to be paid and up till now the government is owning him big amount of money as  banks are now after him because of huge debt hanging on his neck.
He mentioned some of the job he handled on name of Mid East Construction Company to include Rehabilitation of Emmanuel College roundabout at the value of 25million naira and he was paid only 15million, Assumputa Portharcourt road opposite GTB 400metres valued at 50million naira and he was paid 15million naira  remaining 35million naira.
On the issue of erosion control at Urualla, Ideato North, Jack  said  he received only 55million for the erosion site of 1.2km and his job there was to narrow the erosion. The governor gave him the 55million and he used it to hire machines for the work.
Jack disclosed he has so far spent 1.2billion naira on the job and as he was going very  low on cash, he has to stop the job. He mentioned Ogboko nursing school road valued at 130m.
He said he completed all that he was supposed to  do at the Ogboko  nursing school job (750metres road). Another job he mentioned was patching of pot holes from Owerri to Afor Ogboko for 88million naira but received only 40million. He further revealed that he was somehow unorganized in 2019 because we’re he was using as office at former ITC park along Aba road were he said he built 18 offices were destroyed I was asked to go out from that place.
“My properties were demolished, in all honesty I could not say anything because I was afraid that I may be killed also and that was why I did not fight back.
“I was surprised that the place I was using was destroyed and given to Okorocha’s wife for her “All IN SHOP”
At this point, the Director of Public Prosecution, DPP,  Mr Ibekwem was to ask some questions.  He asked if the job Jack handled were advertized and he said yes but there was no written agreement, No certificate of completion.
He also disclosed that Okorocha was one who gave him the job.
On the Aba road job, also Jack disclosed that standard specifications were not used because Okorocha wanted him to follow all his directive.”I advised him but he did not listen, I gave him cost on bill of quantity for federal road and he refused and used that of state specification” Jack also said. Jack revealed that when he started road at IBC Orji and Akachi, Houses were not there but later Okorocha started building at the place .At Orji IBC he built Rochas Foundation College.
Jack however expressed further shock when it was revealed to him that about #4.8bn had already been paid to another firm for the Urualla erosion project when he was yet to get the full money for job done so far for the project.