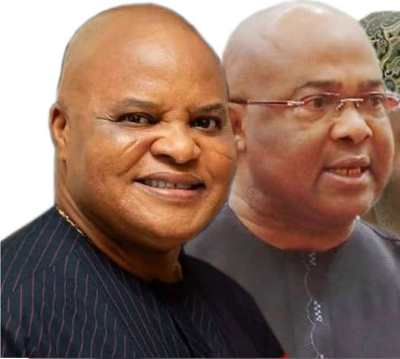 A clash of Titans is likely going to unfold in Imo State as political gladiators warming up to occupy the Okigwe Zone Senate position begins to make their interest public.
So far, about four persons have not only declared intention to run but also commenced subtle politicking to pick the ticket of APC for the main election.
But the coming of Senator Ifeanyi Araraume into the race has readjusted political permutations that has seen the camp of the state governor, Senator Hope Uzodinma tremble.
Araraume late last week got a waiver from the APC to run for the vacant senate seat of Okigwe zone.
Trumpeta was informed that uneasy calm pervades the entire APC family in Imo State as Araraume who was APGA governorship candidate in the 2019 governorship contest in Imo State, has launched a comeback to the party for the senate re-run election.
Despite extending pleasantries to Uzodinma since he came into power, Trumpeta can state that a cold war exists between the governor and the two time Senator of Okigwe zone.
It was however learnt that while Araraume is exploiting all avenue including partnering with the former governor of the state, Senator Rochas Okorocha to pick APC ticket and go ahead to win the election, Uzodinma is reported to be keeping his choice candidate to his chest.
The waiver to contest the Okigwe zone Senate seat has increased concern in the Camp Hope political organization of the governor.