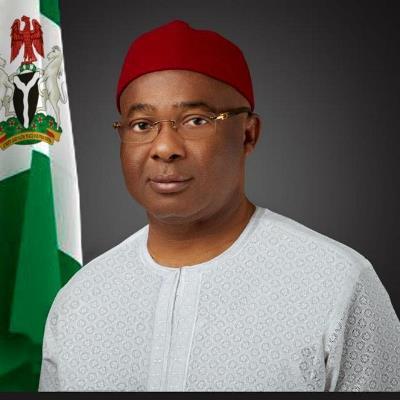 The name of the Imo State Governor is ringing bell in far away Edo State where he is being accused of allegedly attempting to take over the affairs of the Edo State House of Assembly.
According to a report monitored online by Trumpeta which was published by a National Daily, the Edo Speaker, Mr Frank Okiye on Wednesday accused Uzodinma and members of the APC of plotting to take over the affairs of the House.
According to the Edo Speaker published in the report, Governor Uzodinma was accused to be working in concert with Edo State APC members and the recently removed Deputy Speaker, Mr Yekini Idiaye to allegedly destabilize the State Assembly.
Okiye was quoted to have said in the report that the plot was to import fake mace to take over the Edo State House of Assembly “working on cahoots with the former Deputy Speaker who recently declared support for the candidate of the APC to congregate in a secret location to illegally and violently take over the control of the Assembly has been brought to our notice”.
The same report quoted an aide to Uzodinma and Commissioner for Special Projects, Mr Simon Ebegbalem to have said that the Edo Assembly doesn’t exist to make such allegation.  Said he “the illegal Speaker and his Governor are not making sense to me with this baseless allegation. I don’t even know what they are talking about because there is no House of Assembly in Edo State”.
Recall that apart from being the chairman of the Electoral Committee who saw to the emergence of APC Governorship candidate, Pastor Ize Iyamu, Uzodinma is the Vice Chairman of the campaign council of APC Governorship candidate.