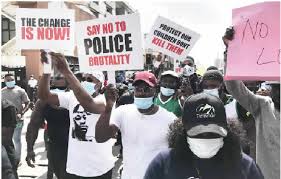 One of the highlights of the ENDSARS protest in Imo State is the fear that has gripped policemen and women.
The ENDSARS protest suspected to have been hijacked by hoodlums went sour when police formations across the state were attacked and in most cases burnt.
Not less than seven police stations which includes Mbaitoli, Orlu, Aboh, Ahiazu, Ezinihitte, Orji and Ehime Mbano were touched during the crisis.
As a result, police personnel and their families who resided at the barracks before the crisis, for fear of their lives started moving out of the barracks.
Trumpeta learnt that the newsbreak of the attack sent shivers down the spines of the police officers who started moving their families out of the barracks.
It was learnt from some police officers that they moved their families into safety from barracks outside the state headquarters.
A source revealed that those outside Shell camp and Amakohia police barracks hurriedly moved their families to safe locations for fear of mob attack.