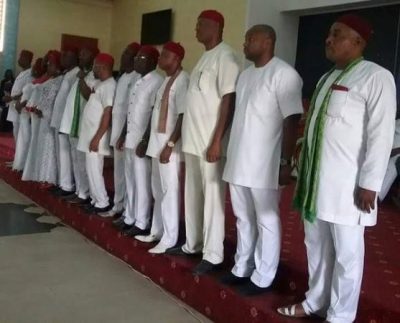 Tunji Adedeji
A fresh crisis is looming in Imo State following renewed resolve to resume office on Monday, November 30th, 2020 by suspended 645 Councillors elected under former Gov Rochas Okorcha’s administration in the 27 Legislative Council Chambers in Imo state.
.Briefing newsmen at Westbrook Hotel Owerri on Thursday, the Legislative Council Leaders Forum led by Rt. Hon .Abed Ochaso Njemanze said they were dully elected and sworn in on 27 August 2018 for a period of 3years in office.
He said it was on fortunate that the then Governor of Imo State ,Rt Hon Emeka Ihedioha  of the People’s Democratic  Party suspended them without respect for the constitution of the Federal Republic of Nigeria.
According to him, “the Attorney General of the Federation and Honorable Minister of Justice, Abubakar Malami (SAN) who acted on instruction of President Muhammadu Buhari has written to the Governor of Imo State to immediately allow the elected Councillors, Chairmen to return to their offices in line with the constitution of the Federal Republican of Nigeria.
Njemanze who announced their readiness to forcefully take over the 27 council offices on Monday, November 30th, 2020 said with the Federal High Court judgment, we expect the governor, being a frontline beneficiary of an earlier ruling, to obey the verdict, especially as we belong to the same political party.
“We pledge our loyalty and support to the governor. We shall join hands with him to give Imo people good and responsible leadership. We shall cooperate with him in the overall interest of the state and its people,” he
said.
According to him, “It is interesting to note that the above mentioned illegality by Imo State government led to a litigation against the state by the 2018 Algon at the Federal High Court Owerri and on the 1st of July 2020 the court ordered for immediate reinstatement of the Chairman and Councilors, as the governor and state house of assembly has no powers to dissolve or suspend elected local government officials.
“On the strength of the foregoing and in concurrence with the Supreme Court decision in Appeal No SC/120/2013: EKITI STATE GOVENRMENT VS PRINCE SANMI OLUBUNMO & ORS, the Supreme Court stated that,
“Simply put therefore, the election of such officials into their offices (Chairmen and Councilors) and their tenure are clothed with constitutional force. They cannot therefore be abridged without breaching the constitution which they derived their force”.
“We therefore wish to inform Imolite, Nigerians and the world at large that we the elected councilors have the legal mandate to return to our various legislative council chambers to resume work.
“To this end we wish to inform the good people of Imo State, and Nigerians respectively, that by the 30th of November, 2020 we shall be going back to our offices to complete our constitutional tenure of three (3) years.
“Finally I call on the press, good spirited Imoiites, Civil Society Organization and the security agencies to accompany us in his struggle to ensure that democratic principles, rule of law and good governance is restored in the Local Government Area system of Imo State.