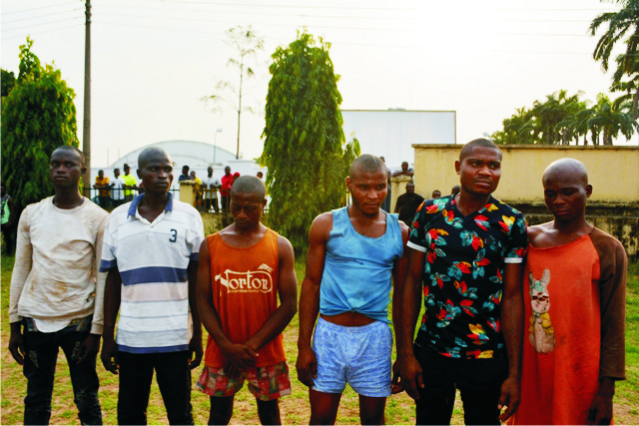 By Tochi Onyeubi
A seven-man car snatching syndicate have been arrested by the Imo state police command for stealing a Lexus 350 SUV.
The gang, according to the release by the Imo state Police spokesman, SP Orlando Ikeokwu, snatched the vehicle, one Lexus 350 SUV with reg no. KSF 758 FS and raced towards Imo State.
He informed that, following a distress call from Abia state, operatives of the command’s Quick Intervention Team arrested them and recovered the said vehicle.
The suspects are Amado Kennedy and Eze Obinwanne from Imo state, Igilegbe Chinwendu and Nwaorie Moses from Enugu state, Godfrey Ntosi from Delta state while Chinedu Agwu and Ejiofor Egwe are from Abia.
The suspects who have confessed to the crime, were also reportedly alleged to have been released from Aba prison after serving jail term for similar offence.
Explaining their various role in the crime, they said, Amado Kennedy, Igilegbe Chinedu and Nwaorie Moses, were the operational members, whose responsibility was to snatch vehicles.
While Godfrey Ntosi, Chinedu Agwu , Ejiofor Egwe and Eze Obinwanne whom are all Artisans, are saddled  with the responsibility of  rebranding the snatched vehicle,  removal of tracking and security devices installed  in the vehicle, as well as sales of any such vehicle.
Efforts are being made by the police to transfer them to Abia state for further investigations and prosecution, the Police Public Relations Officer said.