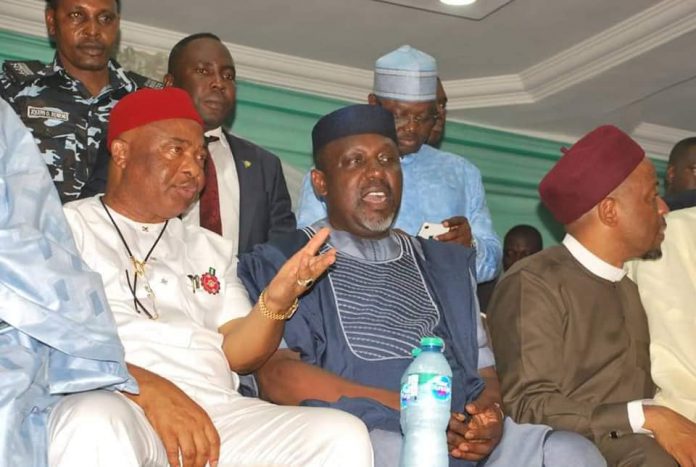 Tunji Adedeji
This certainly is not the best of time for the former governor of Imo State and Senator representing Orlu Senatorial District, Rochas Okorocha , as he faces many battles to clear his name after his exit from Owerri Government House.
The former governor who is now in the trenches fighting many battles to clear his name and ward off further humiliation has been a subject of EFCC investigation since he left office as governor of Imo in May 2019.
Only recently many properties allegedly linked with him, have been placed under interim forfeiture by Justice Fred Njemanze of the Imo State High Court, Owerri.
Trumpeta gathered that a motion ex-parte brought in pursuant to Section 472(1) of the Imo State Administration of Criminal Justice Law No. 2 of 2020, Louis Alozie (SAN), applied for interim forfeiture of the following properties allegedly acquired by Okorocha illegally
The order was sequel to an application brought by a Senior Advocate of Nigeria, Louis Alozie.
The properties allegedly placed under interim forfeiture includes: Eastern Palm University, Ogboko; Royal Spring Palm Hotels and Apartments ; IBC staff quarters illegally acquired for the purpose of Rochas Foundation College, Owerri; Magistrate Quarters,  Orlu Road/Cooperative Office/Girls Guide illegally converted to private use Housing Market Square , Kilimanjaro Eatery.
Others listed includes public building plot B/2 Otamiri South Extension Layout given to the Ministry of Women Affairs for establishing a skills acquisition centre for women illegally acquired for the benefit of Nneoma Nkechi Okorocha’s All-In Stall, Aba Road.
Others include Plot P5 Naze Residential Layout initially part of Primary School Management Board but now annexed to All-In Stall, Aba Road belonging to Mrs. Nkechi Okorocha, and all the properties contained from pages 226 to 272 of the Government White Paper on the recommendation of the Judicial Commission of Inquiry into Land Administration in Imo state from June 2006 to May 2019.
The application was, among others, based on the ground that, “these public properties were converted to personal use by the 1st-3rd respondents and their cronies for which the applicants now intends to recover them in line with the White Paper by the Judicial Commission of Inquiry’s report.
In a related development, in an unrelated development, Governor Hope Uzodinma has allegedly mobilized Imo stakeholders against his predecessor.
The stakeholders on Saturday mandated Governor Hope Uzodimma to use all legal means to recover every property, including money belonging to the state which was stolen by any public official regardless of the status.
Prominent among those in attendance were a former governor of Imo State, Chief Ikedi Ohakim who was chairman of the stakeholders gathering, three Deputy Governors such as Eng. Ebere Udeagu, Ada Okwuonu and Jude Agbaso, former Speakers such as Kelechi Nwagwu and Chiji Collins, Current Speaker, Rt. Hon. Paul Emeziem and his Deputy, Rt .Hon. Amara Iwuanyanwu, former Ambassador Greg Mbadiwe, Retired Deputy Inspector General of Police, Hilary Opara, Prof. Maurice Iwu, Dr. EJK. Onyewuchi, OK 2000, among too many others.
They resolved to mandate the state government to recover every property, money or wealth stolen from Imo people by any person, no matter how highly placed,” the people resolved.