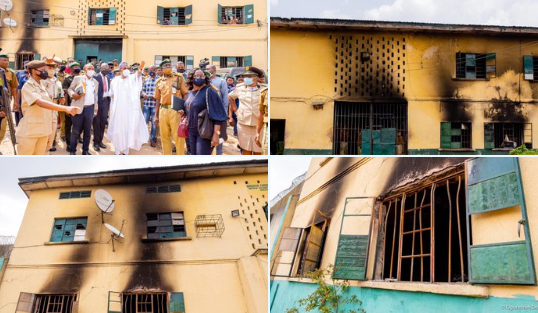 Tunji Adedeji
Barely 48 hours after some unknown gunmen attacked Owerri Correctional Centre and the Imo State Police Command Headquarters Owerri, Trumpeta Newspaper findings show that a combined team of police, army and other security forces are in frantic search for the Pro-Biafra Group locations in Imo State.
It was learnt that the Nigerian security forces stepped up efforts Tuesday by combing the surrounding forests and bushes in the State with a view to halting unforeseen future attacks.
Insider source who would not want his name mentioned explained how the operation started: “The combined team of security operative had revisited the camp of the Eastern Security Network, ESN, in Umunna in Orlu local government area and other parts of where suspected ESN members used to gather.
Not only that, they also visited another camps and they did not see anybody. Nobody was killed in this operation. But our people are living in fears.”
Within Owerri municipal Council, the story was almost the same as people are currently living in fears. Regular sound of guns have made many even running inside their houses and some not keeping late nights any more.
Recall that the IGP had earlier accused IPOB’s Eastern Security Network ESN operatives of being the masterminds of attacks, which led to the release of over 1,800 inmates by the hoodlums and the destruction of scores of vehicles and State assets.
However, the Governor of Imo State, Hope Uzodinma has called on Security Operatives in the State, especially the police command to defend themselves against the members of Indigenous People of Biafra IPOB in the event of further attacks.
The Governor who spoke at the Police Command Headquarters when the now removed Inspector General of Police, Muhammed Adamu, visited the State to assess the level of damage done on the police facility by the unknown gunmen on Monday, expressed disappointment and shock.
He said, “If you can’t attack them, you can at least use your rifles to defend yourselves. Any attack on police formation is an insult to us as a Government. It is also an attack on the integrity of the Government. We must take charge, take control and ensure disciplines.”
Meanwhile, tension remains in the State, even as the Citizens carry out their lawful duties, with alert and vigilance.