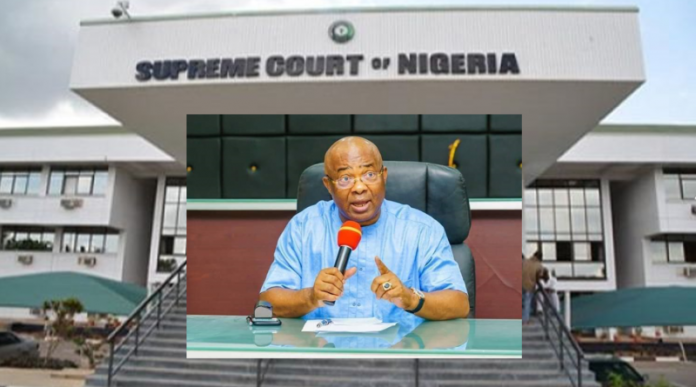 The desire of the Imo State chapter of the PDP to remove the Imo State Governor Senator Hope Uzodinma, who is of the APC through court process is still on.
According to a statement by the State Publicity Secretary Ogubundu Nwadike, the dismissed of a case brought against Uzodinma by a lawyer in Abuja, is not connected with the interest of the state chapter of the party.
The statement read; The Peoples Democratic Party (PDP) in Imo State hereby clarifies that the legal matter is still on, in which the Party seeks the Supreme Court to enforce its judgment on the status of the actual candidate of the All Progressives Congress (APC) in the 2019 Imo governorship election, and consequently the illegitimate occupation of the Office of the Governor of Imo State by the APC.
Our Party makes this clarification following our inundation with speculations by Party leaders, stakeholders, members, supporters, and indeed a large number of people from Imo State and Nigeria at large on the suit by one Barr. Mcfyne C. Chikwendu, who claimed to be a concerned citizen, seeking redress in an Abuja Court asked for the removal of Senator Uzodimma as the governor of Imo State. That was the suit that was vacated by the Abuja Court, which declined the prayers of the applicant.
Our Party restates here that while the matter that was declined was by the Abuja Court, the matter involving the PDP is at the Supreme Court, awaiting hearing. It is the petition by Chief Philip Umeadi SAN, joined by the PDP, asking the Supreme Court to enforce its judgement on the candidate of APC in the 2019 governorship election, in which Chief Uche Nwosu was recognized and disqualified by the Supreme Court as the authentic candidate of APC in the election.
Our Party has faith in the Apex Court, which has established that its decisions, once taken, remain irreversible. We are therefore optimistic that whenever the matter is called up for hearing, the irreversible decision of the Supreme Court on the bonafide candidate of APC in the 2019 Imo governorship election will be enforced.
The Party, therefore, hereby informs the leaders, stakeholders, members, teeming supporters of the Party, and the general public that PDP was not involved in the matter that was vacated, which Senator Uzodinma with his aides have turned into object of propaganda and blackmail. The matter involving the PDP still subsists at the Supreme Court and will be heard at an appointed time soon. There is no cause for worry.
Imo PDP is thankful to the teeming population of Imo people and Nigerians who have expressed concern over the misrepresented development, assuring them that the PDP matter against Senator Hope Uzodimma’s candidature and governorship statuses is still on.