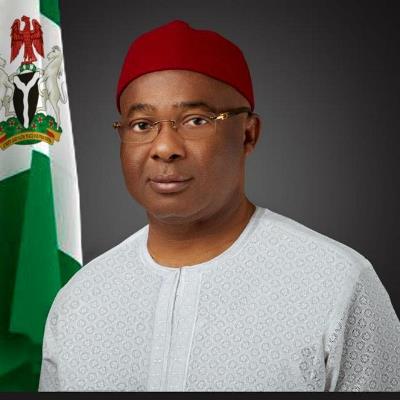 It was all pomp and pageantry on Tuesday, July 27, when the zonal leadership of the National Association of Nigerian Students, NANS, inaugurated the Joint Campus Committee executive, Imo State chapter, to pilot its affairs in the state.
The inauguration of the 9 man executive which held in Owerri, witnessed the leadership of National Association of Nigerian Students pass a vote of confidence on the administration of Governor Hope Uzodinma .
Addressing the students community, Engr. Innocent  Ikpamezie, manager of Owerri Capital Development Authority, OCDA, emphasized the need for students to stand firm and understand their positions in government as well as stand out as major vectors of Positive Change in the Society.
He advised the Student leaders not to be used by any office or political party but should stand to defend the truth and as well fight against injustice and wrong doings of Government with careful and appropriate approach.
Speaking on behalf of his executive, the newly inaugurated Chairman, Comrade Joy Gerald, pledged his support towards setting the priorities for the committee right for students in the state.
He thanked the students for giving them the opportunity to serve, assuring that they would live up to the expectation trusted on them.
He said it is worth to mention that the Nigerian Students in the State has attained a greater level as a result of the participation of Hon Engr. Ikpamezie Innocent in NANS development. That the Students decided to make him the PATRON of the Committee, a decision which  was unanimously agreed upon  by  the Committee and Stakeholders
His words, “The aide to the Governor being a fellow Comrade, is well grounded in the craft of Students structure management and conflict resolution.
“We recognized and acknowledge his efforts in representing our best interests in the state government. Indeed, the governor couldn’t have made a better choice.”
He said it’s their resolve to bring back genuine students struggle and ensure that the dividends of democracy gets to the students. He also enjoined the leadership of the respective institution presidents in the state to work hand in synergy with the various Representatives of the Committee to ensure the smooth running of the Association, NANS JCC.
He pleaded to  Stakeholders and  Governments to always be there to support Students to  achieve their goals and maintain security of “our dear State.”
Continuing, “on this day, it is worthy of note that a new dawn to students’ activism unionism is here as we look forward to a new day full of hope and new expectations for Progress is our culture,” he said.
.The epoch making event also had in attendance, its zonal national observers, the former SSA to the Governor on Students affairs Hon. Oparaji Franklin.
The occasion was also graced by seasoned comrades in the Aluta struggle which included Comrade Anaele Nathan Iheanacho, The Manager; City of Angels Hotel, Comr. Etinyene Friday; NANS Zone B Coordinator, Comr. Okereke Godson, Former Cooordinator NANS Zone B, Comr. Dulison Osinachi; Director Action and Mobilization NANS Zone B as well as other senior comrades to mention but a few.