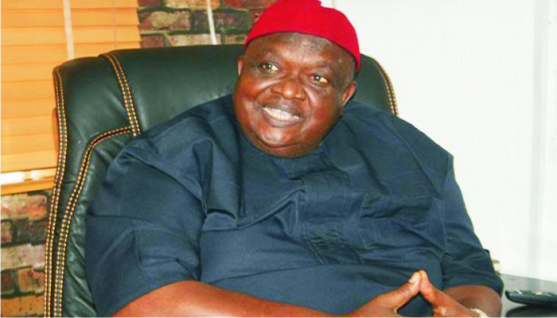 At last, Chief Emmanuel Iwuanyanwu, has called it a day with partisan politics, and from hence forth be a Statesman, and work mainly with Igbo Socio Cultural Organization, Ohaneze Ndigbo for the peace and development of Igboland.
Iwuanyanwu who celebrated his 79th Birthday yesterday maintained that he has done his bit in partisan politics and is satisfied.
Although Chief Emmanuel Iwuanyanwu is a member of the Board of Trustees BOT of the Peoples Democratic Party, PDP but he  did not say whether he has relinquished his position in that party or not.
Chief Iwuanyanwu was a three time Presidential Aspirant, as his efforts could not let him achieve his ambition of ruling Nigeria.
Even though he has remained a member of PDP since 1999, but Chief Iwuanyanwu has identified with each administration that governed Imo State, be it PDP or not.
He was prominent in the Government of Chief Achike Udenwa and Ikedi Ohakim, which were all of PDP administrations. Chief Iwuanyanwu was also close to the Governor Rochas Okorocha Government, right from when he was in APGA, and to APC.
The Ahaijiagamba continued his love with Imo Administrations as he adopted the Governor Emeka Ihedioha era.
Now that Imo State has Governor Hope Uzodinma, Chief Emmanuel Iwuanyanwu has moved with the APC Government in the State raising dusts each time he eulogized Uzodinma, which attracted attacks from PDP questioning if the Chief has left the party.
However, most political pundits are happy that Chief Iwuanyanwu has at last called time on partisan politics, saying that it was the proper thing to do, since the Elder Statesman should relinquish all partisanship and be neutral in political activities so that the coming Generation can listen to him without doubt.
But sources said that politicians love the game so much that they hardly leave the spot, adding that it is too early to judge Chief Iwuanyanwu now, as time will tell if he has truly abandoned partisan politics.