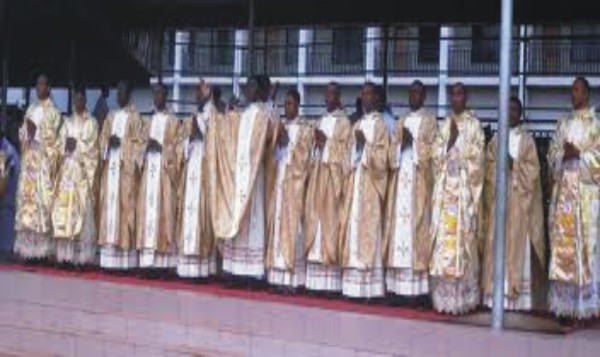 By Orji Sampson
The tragic tales that has continued to trail the controversial sit-at-home order in the south east especially in Imo State has left an unsavory feelings in the heart of many Imolites.
This is as a result of the killing of an Anglican Priest, Rev Emeka Merenu during Tuesday’s sit-at-home at Ihiteukwa in Orsu LGA.
Trumpeta gathered that the Amorji Agbomori village in Nkwere born priest was allegedly murdered by unknown gun men in the early hours of Tuesday following an unfounded allegation that he brought in Soldiers to secure the church and school under his supervision.
The slain priest according to report is the second principal of the school invaded by the gun men were he was killed by the gunmen in his parsonage before burning his car too.
The tragic incident this paper gathered has put residents of the area and the entire Orlu zone in perpetual fear of what awaits them each time a sit-at-home order is enforced by IPOB especially after another ugly incident was earlier recorded at Nkume in Njaba LGA were gun men stopped students in a school from writing their WAEC examination on Monday, burning their motorcycles and bicycles.
The situation has however become worrisome for Imolites  even as the state government of Sen Hope Uzodinma has sounded notes of warning to deal with persons who hide under the guise of IPOB to force sit-at-home order on citizens of the state which  has not still given Imolites the confidence to defy the order.
Recall that IPOB issued a sit-at-home order in the entire South East in protest of their colleagues killed in 2018 at Afarankwu, Umuahia  in Abia State, the home town of detained IPOB leaders, Nnamdi Kanu.