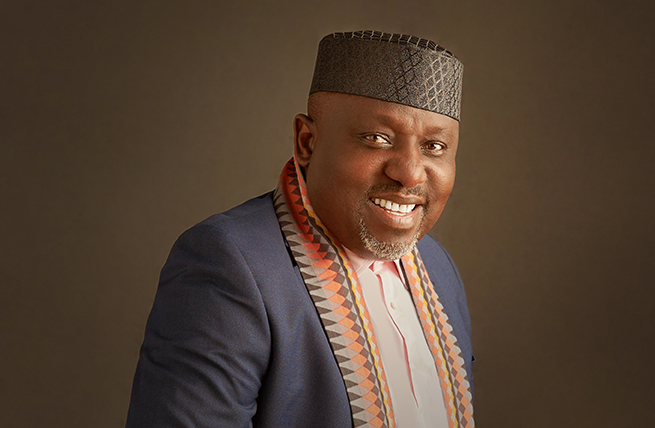 The appearance of  a former Governor of Imo State, Senator Rochas Okorocha in Aso Rock Villa, Abuja,  in a private visit to President Mohammadu Buhari has set tongues wagging, especially the political camp of the Imo State Governor, Senator Hope Uzodinma.
Okorocha on Wednesday evening appeared in the Villa, with his son, Amen Okorocha and his Personal Assistant, Dr Ebere Nzewuji.
It is not yet clear what Okorocha went to discuss with Buhari, but sources told Trumpeta that the visit was bordered on politics.
However, that Buhari gave Okorocha such a private audience days after visiting Imo State on a working visit has thrown Uzodinma’s camp into confusion.
Trumpeta learnt that Imo Governor, Senator Uzodinma particularly, has been overwhelmed with the Okorocha visit after he had thought he was the only personality from Imo State that can easily reach the President.
The Okorocha visit was even more worrisome to the Uzodinma political family days after the Imo Governor had dared all consequences to host the President, which sources said caused Uzodinma some political fortunes.
Trumpeta was told that Uzodinma had hoped that Buhari visiting Imo State have endeared Uzodinma to his heart to warrant giving audience to a follow seen to be opposing Uzodinma, now banding himself as President’s confidant and “beloved son in the East”.
However, Trumpeta was informed that Okorocha brockered the visit to inform the President how he and his Group has been sholved aside by APC, which he contributed to its foundation and nurturing in Imo State, only for Uzodinma to “join the party and throw him out” of the party.
Okorocha, Trumpeta learnt, made the President know that Uzodinma, with his rating among the Imo populace cannot alone take APC to anywhere in Imo in the 2023 general election, especially in Orlu zone, where three of its Federal House of Representatives members are of Okorocha APC camp.
Trumpeta learnt also that the former Governor intimated the P    resident on how Uzodinma has been after him since he assumed office, the recent one being the inauguration of Committee to implement Whitepaper Report  on land allocations in Imo State, which Okorocha sees as targeted at stripping him of all the property he acquired while serving as a sitting Governor.
Our source said that it was not clear what the President told Okorocha, although it was said that Buhari may have told him that the issue of his APC membership with that of his followers would be looked into, but not the matter of his stewardship in Imo State as concerns the Whitepaper.
Meanwhile, seeing Okorocha with the President in Aso Rock Villa shocked the Uzodinma political family who knows what such a privileged visit could do to their Camp in APC and their Leader.
Political pundits believe that Okorocha has scored a political point with that visit, as it has shown that his relationship with Buhari is still rosy, as against the story being bandied about that Okorocha and President Buhari are not in talking terms again after both have been working together in APC and Okorocha even made him win electoral percentage in Imo State that helped in making him President in 2015 and 2019.