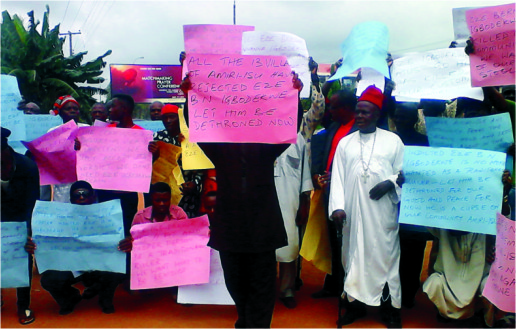 By Okey Alozie
Aggrieved workers of Imo State numbering over 3,000 teamed up with disabled men and women to protest against the Government over the ill treatments melted on them.
The unpaid workers Trumpeta gathered stormed the Government House, Owerri  on Wednesday with placards and blocked the entrance gate of the seat of power to register their grievances.
According to their spokesman who did not want his name to be mentioned, the state government is  owing them more than 18 months, salaries which made them how to shut down Imo if nothing is done fast to pay them.
The protesting workers who  came from different sectors  of government establishment to protest against the state government chanted solidarity songs amidst loud blaring musical sets.
The state governor Senator Hope Uzodinma had earlier told newsmen that he is not owing any worker, adding that every genuine worker has been paid.
The Governor maintained that any worker who has not been receiving salaries has skeleton in his cupboard as long as civil service is concerned.
Governor Hope Uzodinma had upon his assumption of office alleged that there was padding on both the salaries of the workers as well as the workforce particularly in the local government system after payment of first month salaries as Governor.
As a result of the padding, the governor subjected all the civil servants for verification, as act which led to delay ofthe payment of salaries of some workers till date.
The unpaid workers are now crying daily because of the bad condition that they are into many claim they cannot pay their children school fees again, coupled with feeding of their family.
The physically challenged people that besieged the entrance gate of Government House complained that the state government is not treating them well since inception of the present administration.
According to them, the government promised to give their members political appointments and till date nothing was done.
The disabled people insisted that the state government will give them subvention as well as appointment.
The disable people also requested for skill acquisition programe for their members.
The protesters it was further gathered converged at International Conference Centre (IICC) before taken off to Imo Government House on Wednesday morning.