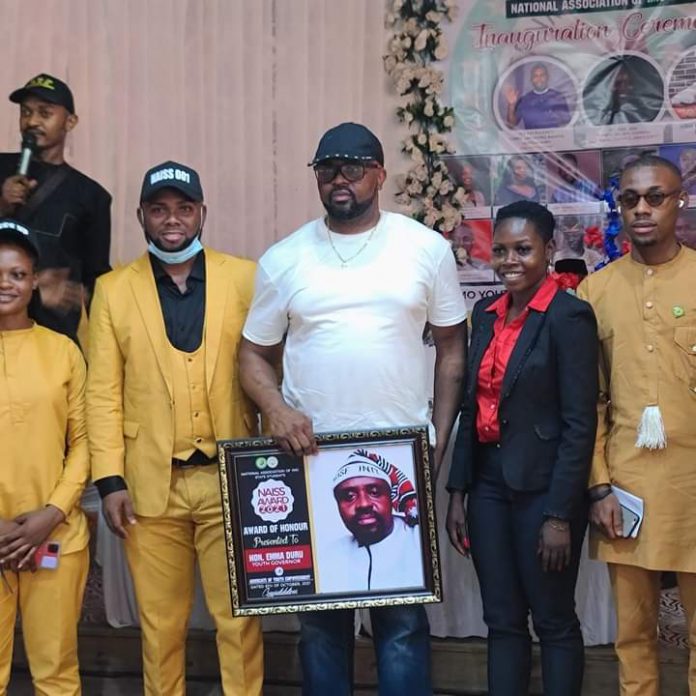 A youth emancipator, Hon. Emma Duru has enjoined youths on productivity, pointing out that it is only by so doing they would attain greater heights in life.

Speaking at the National inaugural ceremony of the National Association of Imo State Students, NAISS, held at the Concorde Hotel Owerri, last week Saturday, October 9, 2021, Duru charged them on efficiency and dedication to whatever legitimate business they do.

Acting as the Chairman of the occasion, Hon Emma Duru explained that his passion for NAISS is unquestionable.

He reminded them that among the principles of NAISS was to bring Students of Imo State extraction together, irrespective of the institution.

He added that it enhances the spirit of brotherhood, as well as create opportunities.

Speaking on the current security situation in Nigeria and Imo State in particular, Duru, also known as “The Youth Governor” decried the level of insecurity that had bedevilled the nation.

He stressed that for any state of unrest, a youth must be involved, hence called on the youth to see themselves as great asset, rather than being used as instruments of destruction.

“If there is any mayhem across the World, I hold the youth responsible to an extent. Our society needs articulate youth to change the world. We blame the Leaders, but we are not helping matters either. While big men children are sent abroad to study, they use the youths and a weapon of violence. It’s time to say no to the selfish politicians”.

Duru reassured both the graduates and undergraduates of bright future, so far as they indulge in a meaningful source of income.

“My activities back then in the University still pushes me into identifying with the youth, I believe in the progressives”, he said.

He urged them to be proactive and use their knowledge and skills appropriately to better their lives, family and the society.

However, he proposed over two to three million naira in the year coming 2022 for their bursary, which are to be strictly benefitted by ardent members of NAISS.

It was disclosed that the bursary package would capture more of the second and third year students, as a means of motivation.

Hon Emma Duru further promised to set up a transportation scheme in collaboration with the newly inaugurated NAISS Leadership, which he said would better the lot of them while they seek for more greener pasture.

The Mbaitoli born entrepreneur also promised to provide a study abroad package to at least one active person from NAISS to study in Canada. While he pledged to take care of over fifty percent of the expense, he insisted that all the benefits would be purely by merit, and to kick-off from next year, 2022.

In a swift response, the newly inaugurated Executive led by the National President, Comrade Umukoro Marvis Udechukwu presented an award of “Advocate of Youth Empowerment” to Emma Duru as a way of appreciating him for all his numerous contributions to NAISS, and the entire Imo youths.