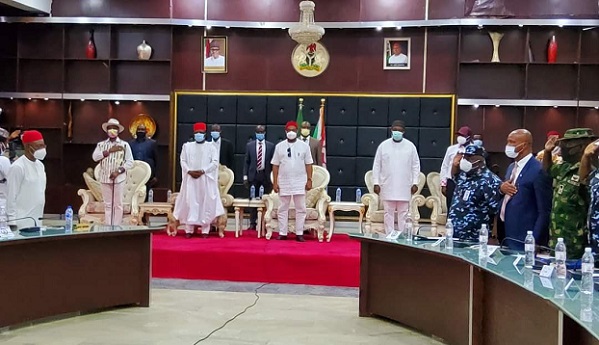 Apparently worried by the effect associated with the intake of illegal drugs among youths, the South East Governors have resolved to deal decisively with anyone or group apprehended.

The call came up following agitations by households, on the dangers inherent in taking drugs.

Among the illegal killer drugs considered a crime in the South East geopolitical zone is the one known as ‘Methamphetamine’, or mkpuru-mmiri in Igbo dialect.

Arising from the resolutions made by the South East Governors and Leaders on a virtual meeting held on Tuesday as signed by Gov David Umahi, they threatened to combat the spread and intake of the killer drug in Igboland.

It was disclosed that shops and locations confirmed to be dealing on such hard drugs would be out rightly forfeited to the State Government  by their owners.

Trumpeta Newspaper further learnt that in further sticking to the agreement, all State Governors were tasked to take the fight seriously.

Dealers on the said mkpuru-mmiri will be incarcerated and made to face the Law.

This Newspaper also gathered that already, emergency phone numbers have been circulated to enable communities communicate with the State Government for the purposes of apprehending defaulters.

However, the Governors assured on setting up rehabilitation centers for the want of treating mentally unstable  victims affected as a result of the intake of hard drugs.

It would be recalled that recently, Imo State House of Assembly read a riot act against the selling and intake of mkpuru-mmiri and other related hard drugs.