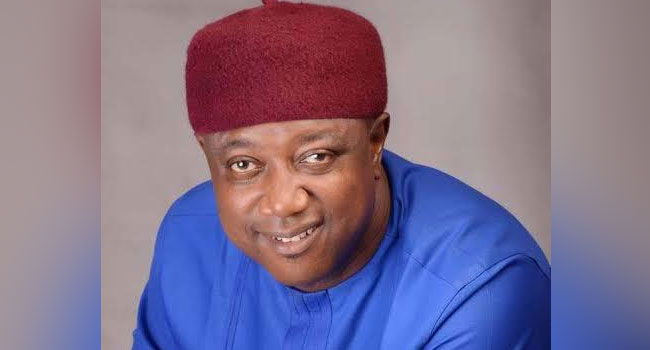 Ibezim from Ehime Mbano came into the Senate to fill the vacancy created by the death of Senator Ben Uwajumogu in December 2019.

Uwajumogu had won the election under the All Progressive Congress in 2019, got inaugurated, but death snatched him away. However, it took time for his replacement coupled with the challenges posed by Covid-19 pandemic of 2020.

With Ibezim coming to pick the ticket of APC and eventually won, he has only few years to say in the Red Chamber before 2023 after he was inaugurated in 2021.

As politicians begin to think of 2023, Trumpeta gathered that those from Imo North Senatorial District willing to go to the senate are many and gradually making consultations for the position.

Even as it is not certain if the incumbent will vie for another term, this newspaper has it on good authority that others interested in the race have started oiling their political machinery to throw in their hat into the ring for the contest.

Trumpeta however learnt that the league of contestants who ran for the position in 2020/21 after the death of Uwajumogu will also file out in 2023.

Leading the pack of the possible contenders is Senator Ifeanyi Araraume. A seasoned politician with strong grassroots support base and capacity in Okigwe zone. If he is not going for the governorship, Araraume’s next bus stop surely must be the senate. Having narrowly lost the APC ticket to Ibezim in the last contest, Araraume who is now in fresh political alliance with the Rochas Okorocha Rescue Mission political family will try his luck again in 2023. He has a history of running for elective position and the next general election may not be an exception.

Another likely contestant is the Secretary to the State Government, Chief Cosmas Iwu. Iwu had ten years ago eyed the seat but lost out. Having earned a rich political platform in the present dispensation, it is certain he will be among those to ask for the mandate of Okigwe zone people in 2023 Senate election. Iwu’s interest is predicated on the manner he sought for the APC party structure during the last ward, LGA and State congresses in Imo.

Trumpeta noticed that the SSG was pacing round the congress arena  to ensure he had a fair share of the offices indicating that he needed it for 2023 Senate seat purposes. Also, he was key to the LGA and Ward Congresses.

Another major top shot that will not be left out in the race is the Education Minister, Chief Emeka Nwajuba. It was learnt that part of the success Ibezim recorded in the run up to the election was majorly the unseen hands of Nwajuba who pulled the rug off the feet of other contestants to ensure his kinsman had it.

Going with Federal might, contact and connection, Nwajuba is a surebet among those likely to vie for the position.

While the big timers will vie for the race, other upcoming crowd pullers like former Speaker Acho Ihim, Chidinma Uwajumogu, Hon Mathew Omegara, the APC Deputy Chairmen, newcomers to the party, Chief Ikedi Ohakim, Chief Chukwem Onuoha and Prof Nnamdi Obiareri are favorites to be part of the APC ticket race. Ohakim initially was reported to have jumped into APC to act as Governor Hope Uzodinma’s joker in the race for the bye-election. Now, Ibezim has won and would be complete his tenure in 2023, the coast is now clear for the former Governor.

Similarly, Obiareri, who is of the Rescue Mission family may be the sole ranger in their faction if he has the required megabucks to run the race.