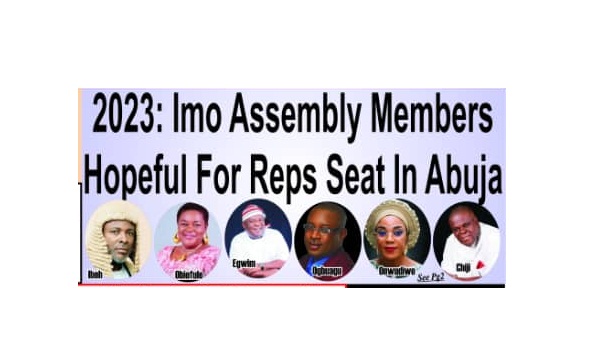 At the end of their tenure at the Imo State House of Assembly in 2023, it is certain, it is certain that not all the present members of the state legislature will end their lawmaking duties at the state constituency level.

Similar to what transpired in the last dispensation where the likes of Senator Sam Daddy Anynawu moved from the House to Senate and Hon Ugonna Ozuruigbo climbing to the House of Reps, luck may smile on the faces of the present members to extend their political journeys to Abuja after the 2023 elections.

Already, some have started showing signs of proceeding to the House of Representatives from the state assembly. One of those not hiding his intention to move is Hon Uche Ogbuagu.

Ogbuagu who represents Ikeduru State Constituency knows that under the Ikeduru East and West sharing formula, a second term will be doubtful, hence the need for him to move  higher where it may likely be the turn of his Ikeduru after Hon Nwawuba of Mbaitoli has been on the saddle since 2015 he won election to represent  Mbaitoli/Ikeduru Federal Constituency.

Based on political outreach and mechanization Ogbuagu had adopted in recent times with the a new baptismal  Ogbuagu Mbaike added to his name, the comedian turned politician is out for a show in the federal Constituency. It is not longer news that in the APC, the battle will be among him and two others; the youthful Engr Akarachi Amadi, the son of popular politician and millionaire businessman, Chief Charles Amadi ( Charlvon) and recently removed OCDA GM, Engr Ikpaemazie.

As he is about to  complete another term in the House, former Speaker and member representing Isiala Mbano state Constituency, Hon Chiji Collins is sure bet to the House of Reps.

Chiji Collins who was Speaker for about 14 months may not have the chance to return hence he will seek a higher position. He is said to be looking at options ahead to see how he will fire on for the next general election despite the fact that the incumbent is from his locality.

Ideato North lawmaker, Hon Barr Arthur Egwim may in 2023 try to be Ideato nation man in Abuja. With the present predicament of  Hon Dr Paschal Obi in APC, the likes of Arthur Egwim may fallout to wrestle for the ticket in APC. Egwim who has maintained a resounding pace in terms of lawmaking and constituency representation may seek the support of his Ideato North people to pressure Ideato South allowing him go. Obi is from Ideato South and there is likelihood of the batton going towards Ideato North.

The next on the minds  of two women ranking women of the House is where to in 2023. Both Uju Onwudiwe and Ngozi Obiefule; members representing Njaba and Isu respectively are on  second missionary journey in the House and by 2023 would be thinking of the higher level in the Reps.

What may however fuel their interest to go the House of Reps is ensure equity and fairness in the sharing of the position in the federal constituency where Nkwerre and Nwangele LGAs appear to have produced more of the representatives than Njaba and Isu the two women came from.

Should people of the federal constituency allow Njaba and Isu to produce a candidate, the two women would be arranging their political structure for a showdown in APC.

It is not certain what would be of the Speaker, Kennedy Ibeh considering what next is his plan for 2023. Should the incumbent, Hon Chike Okafor, his political associate decide otherwise about continuing in the Reps, it is certain Ibe will try to succeed him.