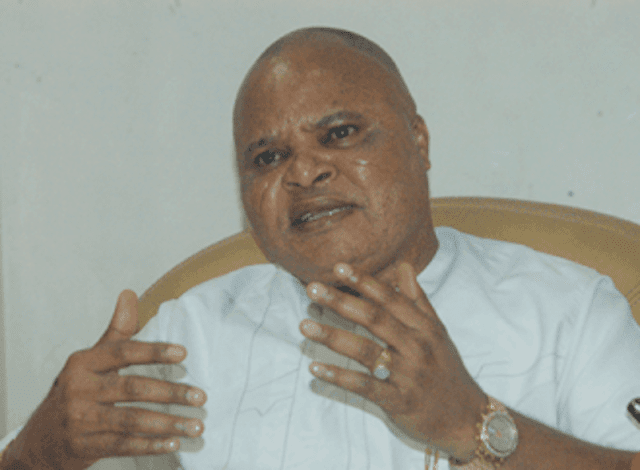 Suspected tackles from a state government in the south east zone and the appearance of the name of a former President of Nigeria, Olusegun Obasanjo, may have been responsible for the sudden dropping of a prominent political figure from Imo State, Senator Ifeanyi Araraume as chairman o the NNPC Ltd Board.

Buhari had months ago named Araraume, a two time senator of Okigwe zone as chairman of the NNPC Board.

While arrangements were in top gear for the inauguration of the board and congratulatory messages sent to the senator over the position, President Buhari through his media aide suddenly called off the official inauguration. No reasons were offered for the stoppage except that the President was indisposed at that moment due to travel programs.

Few days ago, a surprise statement again emerged from the Presidency indicating that Araraume has been replaced with another nominee from Anambra State.

Trumpeta learnt that certain factors may have been responsible for the volte face of President Buhari towards  Araraume getting the federal job.

Investigation by this newspaper indicates that there could have been outside influence that worked against the nomination of Araraume prompting the President to drop him. It was observed that wild jubilation from several angles greeted the appointment of Araraume by President Buhari, the Imo State government appeared unperturbed by the development. While other Imo State politicians and beyond used various medium to rejoice at the appointment, the administration of Uzodinma in Imo State was not involved. No serving government official or sympathizer of the present regime in Imo extended congratulations to Araraume in public domain.

There were fears that the silence from the Imo State government on the Araraume appointment was ominous sign that gave rise to the latest development.

As his name was replaced by Buhari, speculations have been rife that Araraume may have lost out because he lacked the support of his state government.

Another factor suspected to have robbed off the shine of Araraume’s NNPC appointment is the Obasanjo factor.

Moments after Araraume was appointed earlier, unconfirmed reports filtered in that former President was alleged to be uncomfortable with the Buhari nomination.

Consequently, former President, Obasanjo through his media aide issued a statement washing hands off any mischievous challenge to the nomination.

Despite washing his hands off the matter, there are insinuations that involvement of Obasanjo’s name by any means may have spell doom for Araraume going ahead with the job.

Trumpeta also notes that a nominee from Imo State and a strong political ally of Araraume, Barr Emma Nwosu faced a similar ordeal before now. After Nwosu’s name appeared as member of the Fiscal and Mobilization Commission, others scaled the senate screening except him. And till date he is yet to be screened for inauguration.

After losing the 2019 governorship election under APGA, Senator Araraume rejoined APC and went ahead to run the senate position last year. He has been a member of the ruling party.