This was expressed in a communique and comments of some leaders  of the party during their leadership meeting held at the resident of Barr. Ogechi Njoku in Owerri, Imo State capital.

Some of the members, who addressed the well attended meeting complained bitterly over alleged anti party activities of the LGA party Chairman which according to them has hindered the progress and unity of the party and has brought the image and reputation of the governor to ridicule in Aboh Mbaise.

They said the decision was taken on ground of financial misconduct, and Gross Misconduct leveled against the LGA Chairman, Sir Tony Awusaku.

Chief Lawrence Nworuh and Elder Onu Anokam while moving the motion said they party leadership complained about marginalization, recounting how the council chairman has been running the affairs of the party unilaterally, maligning and sidelining his LGA party executive members in the running of party affairs .

They accused the party chairman for using party funds for onerous affairs and misappropriation of rice, gifts and cash given to executives and entire party.

Other reasons mentioned includes embezzlement of party funds meant for condolences to the tune of 2million naira.

Nocturnal meetings with opposition elements geared towards sabotaging the governor of the state and de-marketing the governor, Senator Uzodinma before Aboh-Mbaise electorates through his style of leadership. 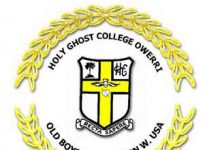