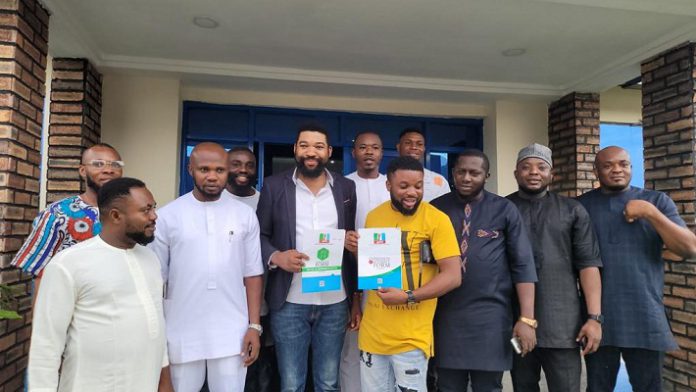 •As Allies Present APC Nomination Form Bought For Him

The House of Representatives aspiration of Hon Michael Onyemaechi Njoku (Crown) for Obowo, Ehime Mbano, and Ihitte/Uboma 2023 Federal seat has received a great backup by the three LGAs.

If what Trumpeta Newspaper reliably gathered from indigenes of the Federal Constituency are to be considered, then the opposition camps in the race should be shaky by now.

It was noted that given by the pressure mounted on him by the Federal Constituency to go and give them a youthful voice at the Green Chambers, Abuja, hence his declaration.

It was also learnt that apart from Crown’s sterling performances since he was elected in 2019, Ihitte Uboma LGA where he comes from is the most favored LGA to produce the next Reps member, judging by the zoning agreement in the federal constituency.

The affirmation didn’t stop at calling Crown to vie for the position by the three Council Areas, his friends drawn across Imo State pulled funds and purchased the expression of interest and nomination forms for the youthful legislator.

While other aspirants were spending their resources purchasing the nomination form, Crown had his at a platter of gold and spent no dime.

His Reps form was duly purchased and presented to him by friends from across the State.

They stormed the APC National Secretariat, Abuja, over the weekend where they acquired the two forms and handed it over to Michael Onyemaechi Njoku.

According to them,  Crown had done wonderful as a state lawmaker and deserved to be elected into the green chambers of the national Assembly in 2023.

However, Njoku, on Sunday, May 8, 2022 presented the APC Reps form to the people of Obowo, Ehime Mbano, and Ihitte/Uboma LGAs.

The elated Reps hopeful thanked them for the love and trust.

To his friends, Hon Njoku assured them that he won’t let them down by the show of trust they had in him by purchasing the nomination form for him without any regrets.

He opined that the journey is a mission and vision of the youth who believe in youth participation in politics.

Furthermore, constituents of Obowo, Ehime Mbano and Ihitte/Uboma areas were charged to be ready for a paradigm shift in more vocal representation in the Reps, even as he called for more support and prayers.

Expressing their satisfaction, Lolo Emilia Anoka said, purchasing the Reps form for Michael Crown was the best decision by his friends.

She stated further that as a State Lawmaker, Crown impacted tremendously on lives, especially the women, widows, and the less privileged.

Lolo Anoka reiterated that Crown is a worthy son in whom Ihitte/Uboma people are proud of.

Speaking, Mr. Iwuala Ugochukwu David, also known as ‘walking Benson’ from Isiala Mbano, said, “Hon. Michael Crown is a good leader. We are so pleased with his performance in the House of Assembly, and bought this form for him because we want him to continue the good representation at the National Assembly. He is the people’s mandate, we will continue to support him with our prayers, strength, and in all ramification”.

“I am not from his constituency, but from people’s testimony, he is exceptional. He has the masses confidence”.

Chief Ikenna Darlington Ohaeri, president of Corporate Brothers of Nigeria from Ikeduru submitted, “I have this personal interest on Hon Michael Onyemaechi Njoku. He is a youth, and being a youth, he stands out as  the best for the job. Crown is the best candidate to represent the people in the Reps.

“At this moment, we are in the era of the youth, Crown is a vibrant one, now we are taking over, the real change is what we clamour for. By his track records, I don’t think any of his opponents will see his back”.

Contributing, Hon. Martins Ekene Ohanele, “Udor Na Ikeduru”, who concur with the initial contributors attributed the fair skinned Lawmaker as a candidate to beat in the political tussle.

He spoke about Crown’s philanthropic dispositions.

Ohanele maintained that among all the present members, Hon Njoku held many empowerment programmes of various stages which favoured over thousands of people. He was optimistic that for a man at the State Assembly to roll out constituency projects from his pocket, he would do more if given a higher ladder like the House of Representatives position.

“Hon Michael Crown is the only House member that moves around without any security, that speaks more of his joviality and free nature”, he asserted.