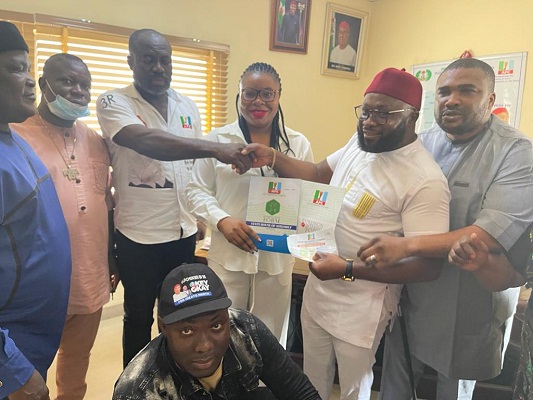 A renowned Marine Logistics Specialist, Hon Ernest Udeze has obtained the expression of interest and nomination forms of the All Progressives Congress (APC) to run for the Ideato North Constituency in the Imo State House of Assembly.

Udeze , a  native of Umume Obodo Ukwu, in Ideato-North  Local Government Area, picked the form at the APC Secretariat in Owerri, the Imo State capital, on Wednesday .

Fielding questions from journalists shortly after obtaining his forms, Udeze said that he was moved by the passion to fix “the ills and underdevelopment in his constituency.”

The leading assembly aspirant who recently received royal blessing from  Ideato North traditional rulers said he would ensure that his constituency’s voice is heard and we’ll represented if elected .

He explained that with over a decade of experience in Marine Logistics, he believes it is time for him to serve his constituent.

The youthful aspirant  also promised to do everything within reach to liberate his constituency from the shackles of bad representation come 2023.

According to him “I feel elated picking up this expression of interest and nomination forms. I must say it’s been God all the way, directing our paths and decisions which informed our campaign slogan Aka Chukwu Diya ”

He lamented that Ideato North LGA has “suffered for long and it’s time we take the bull by the horn and effect that change and correction we all seek.

“I want to restore the people’s confidence in the government and eliminate bad and corrupt representation.”

Recall that Udeze had earlier taken his consultative visit to Ideato North traditional rulers, various youth and women groups, preaching the gospel of his party APC and telling them of his intention to represent the constituency come 2023 and soliciting their prayers and supports.