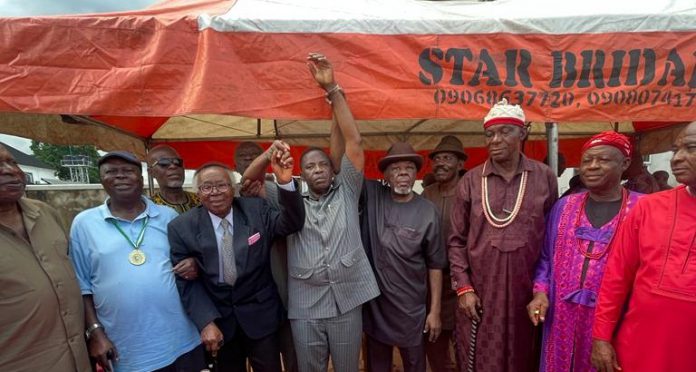 The Convener of Okigwe Leaders and Elders Forum, Dr. Sir. EJK Onyewuchi, on Wednesday announced that former Governor Ikedi Ohakim is the consensus candidate for Imo North Senate, calling on his challengers to sheathe the sword, embrace Ohakim for the peace, unity and development of the Zone.

He said: “Okigwe Zone met on Tuesday and took far reaching decision on who we should send to the Senate to represent us. We have no apologies for the decisions we took and we make no pretences in order to please any particular person. Rather we are interested in what would work for the entire people of Okigwe Zone. We decided that the person we should send to Abuja must be someone who would work through fire and water to ensure that things work for the people, someone that will work closely with Governor Hope Uzodimma and provide the kind of representation and leadership we all will be proud of.

“Without any misgivings, Okigwe people decided that Ohakim has passed the acid test in terms of humility, accountability, accessibility, courage, probity, capacity, competence, experience, name recognition and industry, and decided that he is the consensus candidate for the Zone. We also considered who among the aspirants has contributed to the development and empowerment of the people of Okigwe Zone and agreed to speak with one mind to present Dr. Ikedi Ohakim as our consensus candidate come rain, come shine. In taking this decision we considered that we need peace in Okigwe Zone and that there should be no acrimony in selecting who should represent us at the Senate. We should not waste our resources.

“Ohakim has been supportive of the State Government and he enjoys a cordial relationship with the Governor. This is a critical moment for not just Okigwe Zone or Imo State but Ala-Igbo. As such we need to send someone whose voice and name will be recognized, someone who can stand out in the comity of legislators”.

Speaking on those who are opposed to the decision, the elder statesman said that it was impossible for everyone to agree with their position, adding that they are happy that 90% to 95% of Okigwe people agree with them and are supporting the former Governor.

He called other aspirants to drop their ambitions and wait for another time, adding that it is in the best interest of the people of the Zone for everyone to join hands and make the “Okigwe Project a reality”.

While thanking the sons and daughters of Okigwe Zone that turned up for the meeting in their numbers, Dr. EJK said that anyone who tries to do anything contrary to what they all agreed to do would be embarrassing Okigwe Zone. He called on all and sundry to put the interests of Okigwe Zone first.