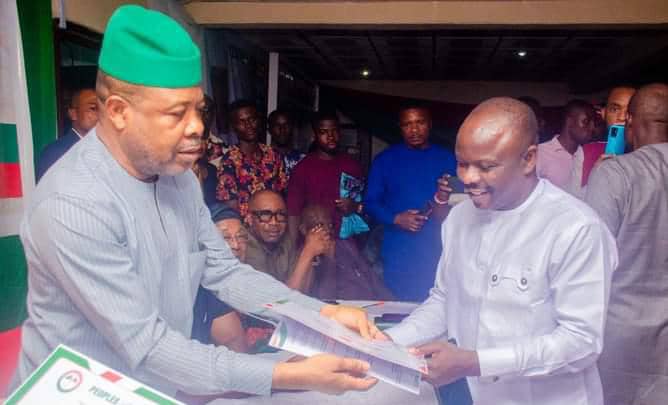 Chief Kingsley Odionyemma, the Ngor Okpala PDP Candidate for the forthcoming 2023 State Assembly election has expressed his appreciation to the members, delegates and leadership of the party for finding him suitable to be her flagbearer in the coming general polls. He said the votes he gannered in the indirect delegates election was a clear demonstration of the party’s reward for a loyal, committed and patient party man, adding that he will do the party proud if elected. Chief Odionyemma, a business  Management guru and Health practitioner who was speaking at a Thank you Get together of Ngor Okpala PDP recently at Amafor Imerienwe,  said his era in the Legislative House would mark a departure from the lackluster performance of some former occupants from Ngor Okpala. In his words:” Am going to Imo House of Assembly to make Ngor Okpala to be heard, for my people to be respected and regarded; to remove coldness and colourlessness in representative government at the House of Assembly level. You will have a dependable voice you will be proud of ” .he declared. He used the opportunity to inform the party faithfuls that he has been issued Certificate of Return which guarantees unimpeded process for him to be standard bearer of the party in the coming election, and expressed gratitude to the State PDP led by Engr  Charles Ugwu. Odionyemma did not end his speech without harping on the need for eligible indigenes of Ngor Okpala to endeavour to be registered as voters and for all those with issues in their PVCs to rectify them as that is the sure way of voting in right candidates at the polls. Earlier in his opening speech, the Apex Leader of Ngor Okpala PDP, Chief Emma Nwaogu enjoined the party members to close ranks and regard the just concluded primaries as family affair which has come and gone. He charged those who lost to accept it as the will of God and encouraged those who won to embrace everyone for the bigger battle of facing other Parties. ” This general election is one we cannot afford to loose, Chief Nwaogu emphasized ” ln their separate  speeches on the occasion , the Imo East Senatorial Candidate, Barr Uche Onyeagucha and the Aboh Mbaise/Ngor Okpala Federal Constituency Candidate, Engr Chibuzor Albert Agulanna extolled the steadfastness  and resilience of party members which culminated in their being found worthy to bear the party flags respective. They expressed delight in the way they trooped out enmass for the Get together defying the inclement weather of the day and promised to raise the bars at their various levels of representations when elected. The event was graced by party members from the eleven wards in Ngor Okpala   and notable leaders, among whom were, Prof Jude Njoku,  LGA Chairman, Chief Morrison Njoku, Chief Henry Ekpe., Dr Austin Uganwa,  Hon Casmir Anaele,, Dr Tobechi Chigbu, Dr Chigozie Okereke., Dr Perry Njoku,Chief Oliver Okere, Emeka Ude, Prince MacDonald Enwere, Nze Charles Nkwocha, Lady Beatrice Nkwo, Chief John Eke, Sir Cornelius Okere, Nze Hyacinth Nkwocha, Hon Charles Abara, Sir Emeka Amajirionwu, Hon Okey Azuonwu, Sir Sunny Ndukwu, Lady Leticia Okere, Hon Cordelia Onwuka,Hon Ifeanyi Nwaiwu,, Chief Theo Ekwonye, Chief Stanley Eke,  Mr Bona Okorie, Engr Norbert Anyanwu, Chief Patrick Unegbu, Chief Cajethan Emeghara, Mrs Philomena Nwosu, Hon Josephine Obilor and Hon Osy Amadi, among others .