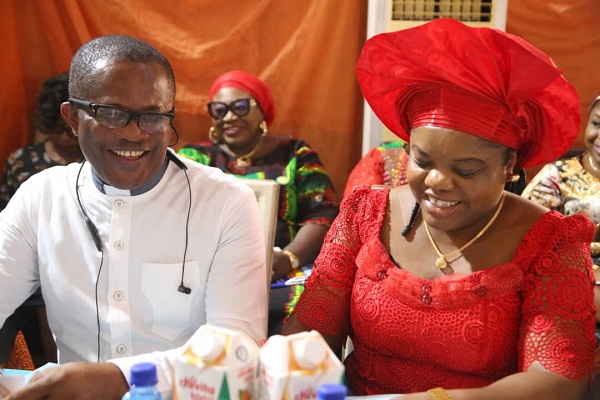 It was a festival of encomium yesterday for the Rector of the Federal Polytechnic Nekede, Engr. Dr. Michael Arimanwa FNSE and his wife, Engr. Dr. Joan Arimanwa FICE, as the women of the foremost institution bestowed them with an award of honour for their exceptional diligence and commitment to women’s development in the institution. The event which was held at the main auditorium of the institution attracted top female government functionaries and other stakeholders in women’s development.

The polytechnic women operating under the aegis of the Federal Polytechnic Nekede Owerri Women Association (FEPNOWA) also used the occasion of the award investiture to celebrate their maiden August Meeting anchored on the theme: “Career Women and Proper Parenting: Challenges and Prospects.”

Presenting the award to the Rector, the Chairperson of the group, Dr. Raymonda Obioha stated inter alia: “I am so elated to present this award to the Rector, a man who has supported the women of this great institution, a man who is dedicated to duties, a man who has inspired us in all ramification. This award cannot reward him for his indefatigable achievements but we plead with him to accept it as our own modest show of appreciation.”In the same manner, women praised the Rector’s wife for being supportive of her husband in championing the cause of women’s development in the polytechnic. As the Patroness of the association, the women hailed her for being committed to their cause hence the award of honour bestowed on her. In his response, the Rector thanked the polytechnic women for the honour given to him and his wife.

Other award recipients at the occasion included the Deputy Rector (Academic) C.C. Onyemenonu, Bursar, Venatius Ngozi Anyanwuocha, Librarian, Dr. Chris Enyia and the Executive Assistant to the Rector, Ms Nneoma Florence Eleke. Others were Dr Anthonia Nneka Nwosu (former Deputy Rector, Academic) and Chief Adolphus Ngozi Obi (former bursar). According to the women, the personalities were awarded for their stellar contribution in the polytechnic.

Meanwhile,  the First Lady of Imo State, Her Excellency Barr. Chioma Uzodinma has charged women of the polytechnic to develop leadership skills and support each other in order to achieve results in the society.

The First Lady was speaking as the Special Guest of Honour at the event through Lady Nkechinyere Ugwu (Commissioner for Women Affairs and Vulnerable Groups). She also enjoined women to be resourceful because their role in the society is essential. Finally, she expressed appreciation to the women for the maiden August Meeting while pledging her support.

In a guest lecture, earlier, Engr. Pst. Evelyn Nwankwo charged women to deliberately build their homes by honouring their husbands. She also encouraged them to be prayerful and careful in raising godly children. As career women, the guest speaker reminded women to learn to listen to their children while censuring the content of what they watch or listen to.

In her speech, the wife of the Rector and the patroness of FEPNOWA, Engr. Dr. Joan Arimanwa FNICE, enjoined the women to reflect on the theme of the August Meeting while inspiring them to be firm and committed to their parental duties.

According to the university don, “Proper parenting is even more challenging today because today’s world is more complex and dynamic than it was a few decades ago. There is therefore an urgent need for parents to pay more attention to their children.” She also warned against leaving children in the care of nannies, school teachers, neighbours and strangers, while urging the women to strive to be unique, resilient and diligent.

It will be recalled that the Rector, Engr. Dr. M.C. Arimanwa, is reputed for his legendary support for equitable gender representation in his appointments since he assumed office as 8th substantive Rector of the institution. According to Dr Raymonda Obioha, FEPNOWA President, the Rector supports the developmental activities of women without reservations.